David Mamet's RACE is imbued with the narrative elements we've come to expect from the expert playwright â precise, provocative dialogue, characters with questionable scruples, and a high-stakes, pressure-cooker, time-is-fucking-ticking scenario that tends to fry those who can't commit to quick and dirty decisions. It all results in a whirlwind pace unlike most other dramas in the field.

As Canadian Stage's production demonstrates, however, these elements alone do not add up to make a well made play. Mamet takes far too many leaps linking the impending courtroom drama with the dynamics of the law office. And the narrative is sadly not elevated under direction from Daniel Brooks, often feeling lost and plodding. Nigel Shawn Williams gives, by far, the strongest performance beside a determined but underwhelming Jason Priestley.

After being accused of rape by a young black girl, Charles Strickland (Matthew Edison), a wealthy, arrogant white man, enters the offices of Jack Lawson (Jason Priestley) and Henry Brown (Nigel Shawn Williams) to request their representation. It's ultimately the lawyers under examination when Lawson and Brown surmise he's sought them out because they're the only law office in town with a black attorney. Add an attractive black law student to the mix, Susan (Cara Ricketts), and a full-scale fireworks display of racial tension explodes inside the confines of the clinical office.

Strickland's case is not the real focus here (although pinning the case-breaker on sequins is wickedly clever). The rape charge provides a catalyst for frank and prejudicial conversations about race that swirl and ripple throughout the office. The torrent of provocation finally settles on a dispute between Lawson and his law student, but it's here where the drama falls flat. 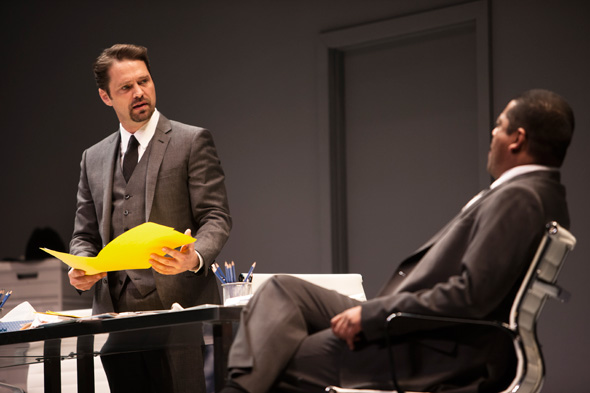 This relationship hasn't been developed enough, with neither background nor investment, to hold the weight of the drama. A topic as slippery as racial prejudice just doesn't land swiftly in this character dynamic and Strickland all but disappears from the action.

It's evident Brooks has an understanding of how to drive Mamet's language, but the staging loses all energy trapped behind the massive table at centre. Scene transitions in dark lighting seem half-way between stylized movements and merely actors making their way to the next position.

Towering file cabinets in the wings are one of the more memorable aspects from Set Designer Debra Hanson, but the two spaces outfitted in these areas are under-utilized, hardly ever playing into the action.

Williams turns in the most on-point performance as the quick-tongued and cynical Brown. While Priestley certainly has the toughest role, he often seems dwarfed by the vitriolic text in both volume and command. There are moments when he hits his stride, but across the board the performance comes up short.

While it's bound to inspire discussion on all the racial perspectives Mamet has packed into 90 minutes, making its aim a noble one, it's not even close to the playwright's finest work and major flaws hold this production back.

Race, written by David Mamet and directed by Daniel Brooks, runs at the Bluma Appel Theatre until May 5.