New Wizard of Oz production sticks close to the classic

Whether you're a friend of Dorothy's, a fan of Toto's, or remember once being swept up in the technicolour dream of the 1939 film, The Wizard of Oz remains an enduring cultural classic. The production now on stage at the Ed Mirvish Theatre, with additional music and lyrics from Andrew Lloyd Webber and Tim Rice, is a beefed up version that wisely doesn't stray too far from the film.

There are no real revelations to be had in the new additions, many of which are sketched in to support the main story arc. The parts you will remember are done well and a couple of performances manage to stand out amidst all the emerald and yellow. The most notable elements are those that contribute to the stage spectacle — sets, projections, costumes — where it seems no expense has been spared.

The initial sepia-tinted scenes in Kansas are framed with beautiful sprawling projections from Jon Driscoll. It's here where Dorothy (Danielle Wade), a competent Judy Garland stand in, delivers "Somewhere Over the Rainbow" with charm. It's a shame her climactic moment comes so early in the musical. Once she arrives in Oz and meets the Munchkins, a decidedly welcoming bunch, set and costume designs from Robert Jones really pop. 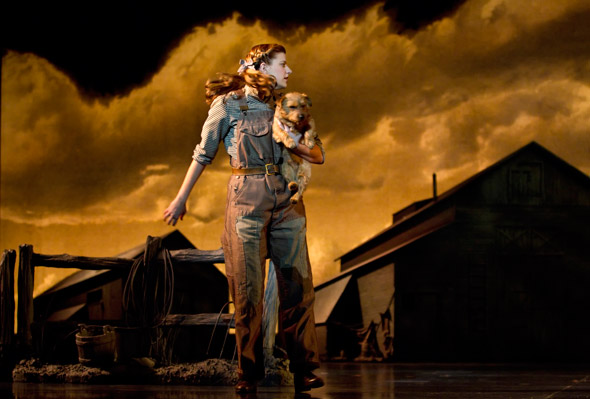 Of the new songs, those in Kansas feel like fleshed out exposition. Where we do get more of a story is at the castle of the Wicked Witch, played by Lisa Horner who gets in a number of solid zingers. The songs at the castle, performed by an army of Winkies, feel more like numbers from Cabaret with all the dark aggression. The one song that does sound like it belongs in a large musical, "Already Home," is a rousing farewell to the world of dreams.

Dorothy's companions, Scarecrow (Jamie McKnight), Tin Man (Mike Jackson) and the Lion (Lee MacDougall), all seem a little 2D in the new adaptation. The cheap connect-the-dots hints that the Lion's cowardice might be because he's a little fey is somewhat problematic. The floating Wizard (Cedric Smith) is definitely of the darker variety and will likely scare younger audience members. 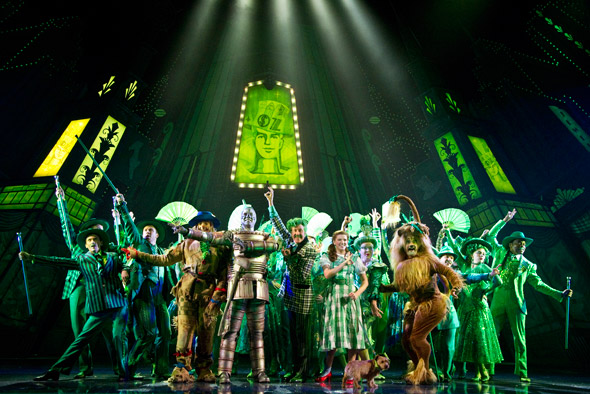 Wade carries through alright with Toto (either Tilley, Neddy or Winny) by her side — her Dorothy is a mix of sweet and determined. She's aided by Horner, who turns in a devilishly funny Andrea Martin inspired performance, and Robin Evan Willis as a radiant Glinda. Each tend to carry the scenes which require a witch's presence.

Sams' direction plays up the added comedy, which sometimes seems to comment on tropes from the original film. The choreography from Arlene Phillips is best in the large ensemble scenes.

Like a sturdy gingham dress, the musical does its job when it's a straight-forward take on the classic film. Save for "Already Home," you'll hardly remember the additional material.

The Wizard of Oz, directed by Jeremy Sams, runs at the Ed Mirvish Theatre until March 31.