Mirvish puts a rowdy spin on early Beatles in Backbeat

The music of The Beatles will forever be the subject of endless tributes and chronicles — the tunes never disappoint and neither will the box office takings. But you won't find much of it in Backbeat, now onstage at the Royal Alexandra Theatre.

The show is not exactly about The Beatles. Rather it's about how five arrogant and prickish young scallywags from England become the world's biggest music sensation playing clubs in Hamburg. And along the way, how the band losses its original fifth member, Stuart Sutcliffe (Nick Blood), who falls in love with a photographer named Astrid Kirchherr (Isabella Calthrope).

What we get in place of a Beatles triptych is a little richer. Iain Softley and Stephen Jeffreys focus the story on Sutcliffe's struggle to live up to the role of artist in the face of self-doubt and a love that inspires him far more than a bass guitar. Also negotiating this terrain, although in very different ways, are young frontmen John (Andrew Knott) and Paul (Daniel Healy) whose collaborations only become possible with the exit of the moody Stu.

The music the boys grit their teeth on, in a violent and rowdy hole in the wall, are songs from the likes of Chuck Berry, Little Richard, and The Miracles. It's played to great volume and great effect by the Beatles five, which includes Daniel Westwick as the baby-faced George, and Oliver Bennett as drummer Pete Best, who's later ousted in favour of Ringo. 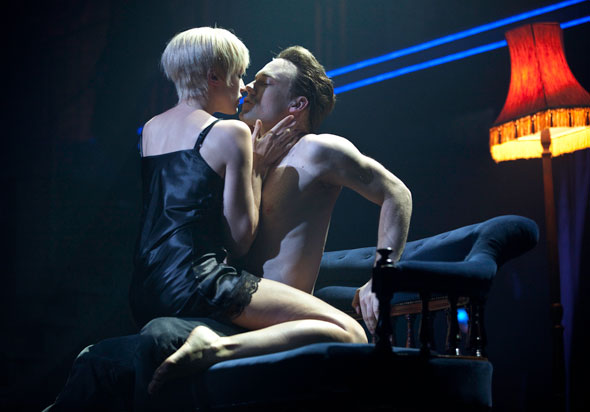 Softley uses many of the songs as a soundtrack to the story of Stu and Astrid. The storyline is not positioned as a choice between love or fame, but rather how we're guided by outside forces — a love interest, a close friend, our best mates, and ultimately our bodies. Here, the untold story proves just as interesting as the one we know well.

The Beatles mythology is less plausible. Astrid tells Stu that, "John wants the world, and Paul will find a way to get it for him." It's a poetic thought that's informed by knowing the whole story. Casual jam sessions between John and Paul mixing their two styles to make "Love Me Do" and "Twist and Shout" are also too simple and cute.

Further, the staging of the German clubs by director David Leveaux leaves a lot to be desired. The boys look more like they're in a zoo than a club, where they serve as an exotic spectacle for a crowd of clichÃ© German cutouts.

Blood channels an awkward stiffness as Sutcliffe that's heavy on cool, while, thankfully, Knott commands the stage as future prophet Lennon. He's not yet the pacifist Beatle organizing bed-ins, but rather a rabble-rousing bully gone pleasure seeking abroad.

Backbeat is an energetic portrait of the youthful Beatles that, while it's not perfect, pays respectful homage to the contributions of their earlier members.

Backbeat, written by Iain Softley and Stephen Jeffreys, and directed by David Leveaux, runs at the Royal Alexandra Theatre until September 2.