David Mamet's Speed-the-Plow, a 25 year old play about the business of film, is anything but dated. On the cusp of the opening of Christopher Nolan's The Dark Knight Rises, a film that should go on to make one billion dollars internationally, and on the heels of Disney's 200 million dollar flop John Carter, the sharp dialogue about the intersection of art and commerce still resonates.

It's a production that never achieves full liftoff, however, as the three acts progress. The first is on somewhat uneven footing in its search for the staccato Mamet tone. In the second, Sarah Wilson provides a much needed female voice. And the third sends home Mamet's pronouncements about the ultimate bottom line. The gritty satire features strong performances that make the juicy Mamet dialogue enjoyable to follow.

The play begins in classic Mamet style with a pitch from Charlie (Jordan Pettle) who promises to deliver an A-calibre star to studio executive Bobby Gould (Ari Cohen). The two men, like the project on which they're about to collaborate, lean on masculine shorthand to solidify their deal. When an altruistic project — a "good" film as opposed to one that will make money — championed by Karen (Wilson) threatens to bump Charlie's picture, the pieces in Mamet's chess match become active.

Director David Storch does an admirable job negotiating the shifting tone driven by the character who wrenches control of the action, all three of which have their moment in the sun. But at the end of the play, the three acts feel a bit incongruous. Bobby's commercial castration in the play's concluding act slows down the swift pace at a crucial time. 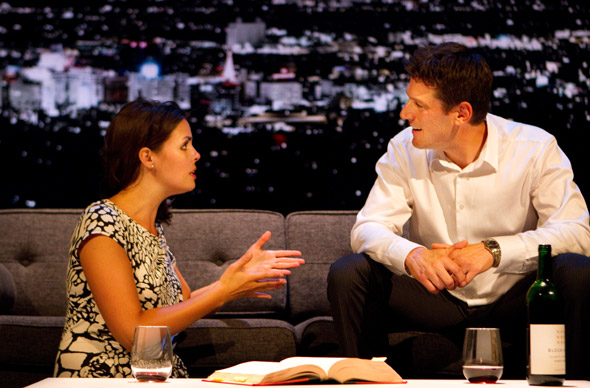 Mamet's dialogue reflects the inter-workings of studio executives and is, as you would expect, still sharp and punchy. It's the story which, while it still feels relevant, doesn't quite reach the wallop the playwright intends to deliver. There's a lot of bark, but never really any bite.

Cohen and Pettle spar well inside Mamet's verbal cage. You can almost feel the unpleasant history between these two lurking under the surface, which makes for colourful exchanges. Pettle especially is well cast as the jittery and wily little up-start who will protect his opportunity by any means necessary.

But it's Wilson in the second act who delivers some of the play's more memorable moments and insights on the business of film. For a character we can sense has more in the race than she lets on, we're secretly rooting for her to triumph. Wilson negotiates the terrain well.

It's not Soulpepper's best Mamet — Glengarry Glen Ross and Oleanna offered us more in story and in translation — but there's still a lot to enjoy here.

Speed-the-Plow, written by David Mamet and directed by David Storch, runs at the Young Centre for the Performing Arts until September 22.