As much as David Storey's Home is about the pace of the dialogue and the pauses in between, what you'll inevitably remember is the way the seemingly unimportant setting comes sharply into view.

Soulpepper's production, from director Albert Schultz, is a picture perfect portrait of the five characters who feature in the piece. In this actor-driven play, the performances rise to the level of Storey's carefully constructed interactions. While it may not leave you with that feel-good cushioning after the lights come down, there's a lot to consider once all of the pieces fall into place.

In the play's first scene, two polite English gentlemen, Harry (Michael Hanrahan) and Jack (Oliver Dennis), discuss a wide range of interesting and sometimes obscure topics. From the weather to aspects of their personal lives, the men float effortlessly among their various preoccupations. When their female counterparts Marjorie (Maria Vacratsis) and Kathleen (Brenda Robins) arrive, there's a familiarity here that's not expressly stated — the talk devolves into sexual innuendo and a battle for the two remaining chairs.

The setting — which, were I to reveal it outrightly would detract from the viewing experience — makes its presence felt with the arrival of the young chap Alfred (Andre Sills). 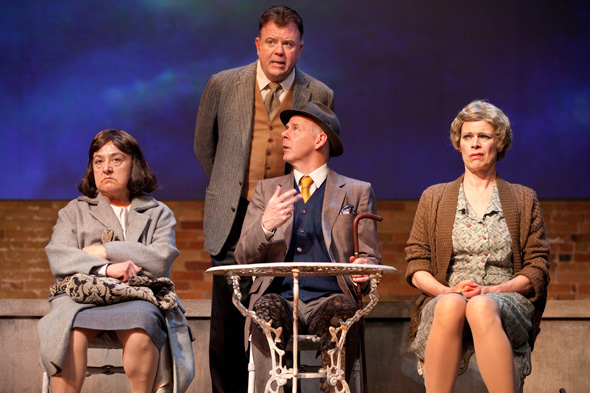 Storey's play doesn't exactly launch into conflict. In fact, the first half hour is the picture of civility. Underneath the surface, however, we sense that these two gentlemen are slowly falling apart. It takes the extra pairs of eyes, in the form of Marjorie and Kathleen, to remind the men where they are. When they both return to the reality of their surroundings, the centre cannot hold in the play's conclusion.

Schultz navigates the piece exceptionally well. He finds the delicate balance between comedy, in the early scenes, and sadness as the characters struggle with their hopelessness. The hallmark of success with a play like this is that you feel slightly guilty for taking so much pleasure in the early comedy. It works here like a charm.

Dennis and Hanrahan develop a quick rhythm in the opening scenes. In his 50th performance for Soulpepper, Dennis demonstrates the quiet restraint which has come to define his characters.

Vacratsis is a delight to watch — her perma-scowl colours each accusation. And Robins, who serves as her giddy antithesis, provides great energy. Ken MacKenzie's beautiful cloud projections reflect the slow-moving, meandering thoughts of the characters.

Home may not always be where the heart is, but in this case, Storey's setting yields some intriguing and compelling characters.

Home, written by David Storey and directed by Albert Schultz, runs at the Young Centre for the Performing Arts until June 20.