Prisoner of Tehran is as powerful as they come

Prisoner of Tehran is a powerful production that resonates with today's situation in Syria.

This play is the stage adaptation of Marina Nemat's international bestselling memoir. The story details her arrest in 1980, at the age of 16, for speaking out against Ayatollah Khomeini's regime. She was imprisoned and tortured in the infamous Evin prison. At the moment of her scheduled execution, her interrogator forces her into marriage â and she remains his prisoner outside of Evin.

Motifs of faith and survival remain constant throughout the story. The audience is taken on a journey through the struggles and perseverance of a young woman named Marina, played by the beautiful Bahareh Yaraghi.

Just two other actors fill in a variety of male and female roles, played by Razi Shawahdeh and Mirian Katrib respectively.

Katrib is best when she takes on the role of Marina's husband's doting mother, eager to cook for her son and his new bride, demonstrating that "Food is the way to show love" - just as her son did for Marina while in prison, where we first see him bringing a bowl of home made chicken soup to her in her cell. 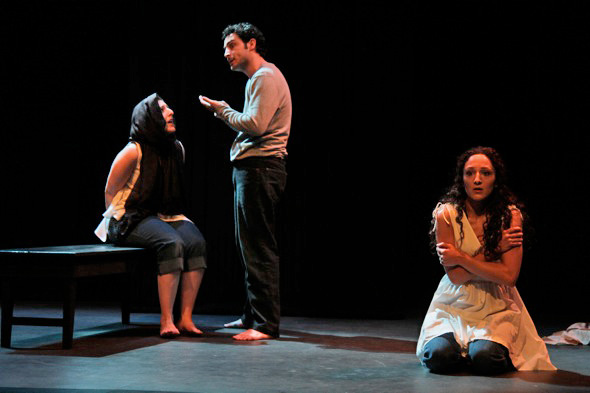 Shawahdeh is equally adept at switching roles, from the brutal prison guard Brother Ali to Marina's husband and later her father, among other roles.

Maja Ardal adapted and directed this memoir to the stage, often using the theatrical device of tableaux (where all the performers on stage freeze in position and then resume action as before) to transition between scenes.

Early on in the performance, this proves a little abrupt. But as the show goes on it becomes more fluid and effective (when Marina recites a psalm while in prison that transitions into a joyful childhood memory of the same psalm shared with a childhood crush).

It's not an easy tale to tell on the stage, but it's an important one, with similar atrocities going on in Syria today. This production is effectively done here, helped along by Lyon Smith's appropriately chilling sound design and Steven Hawkins' light touch with the lighting.

Tickets for remaining performances until April 28 are $30 (Saturday matinees are PWYC) and are available at the Arts Box Office online or at 416-504-7529.