Cruel and Tender brings Egoyan back behind the stage

Martin Crimp has an ethereal Beckettesque presence. In town for the opening of his 2004 play Cruel and Tender, a modern version of Sophocles' Trachiniae, the playwright — a tall, stick-thin ghost-like figure — appeared for the curtain call alongside the play's director, acclaimed filmmaker Atom Egoyan.

It's a play that's set to divide Toronto audiences, not necessarily for Egoyan's direction of the piece, as the fanfare would suggest, but rather for Crimp's fractured portrait of war and a disappointing performance from the play's lead.

Alongside a chorus of helpers, the tortured household of a General at war unravels under the pressure of the father's decisions overseas. Amelia (ArsinÃ©e Khanjian) sends her son James (Jeff Lillico) to fetch his father (Daniel Kash) from the front lines, where he has obliterated a city in the name of war. We learn from a government official (Nigel Shawn Williams), that the mission was not actually to root out terrorists, but to claim the daughter of the fallen dictator, Laela (Abena Malika), for his own. Amelia plots to return her husband to his senses with a test tube cure.

Crimp's play is an indictment of the war on terror and the language used to service recent missions to Afghanistan and Iraq. His thesis (among many ideas) is that human beings are not mentally equipped for the actions and consequence of war. Each character, the General being the obvious example, bends, falls, and is crushed by the weight of war, whether in the field or not. While there are strong moments, not all of the fractured and abstract scenes coalesce. 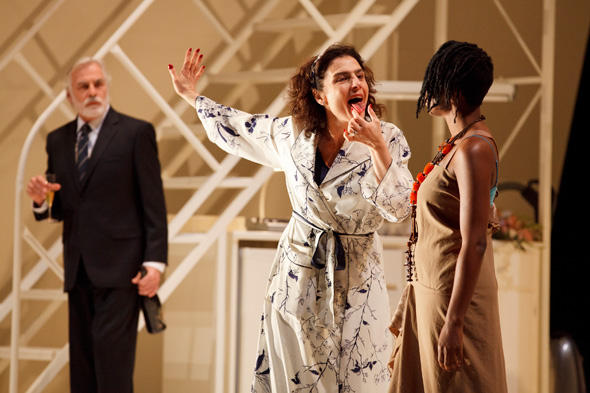 Khanjian fails to rope the audience into the web tightly-weaved by her character Amelia, who dominates the first half of the show. She doesn't match the intensity of her wondrous performance in Palace of the End, seeming vocally dwarfed by the imposing set by Debra Hanson in the expansive Bluma Appel. The characters of the chorus (Cara Ricketts, Brenda Robins, and Sarah Wilson), there to interpret and distract, sing karaoke songs whenever things go awry — a strange inclusion in Crimp's text.

In the play's second beat, where the son and father return home, the action is better. It's in these scenes — a gut-wrenching familial reckoning — where the play reaches towards the promise of the sum of its parts. Lillico's return injects much-needed intensity into a plot that has, until then, felt like low-stakes. He's commanding, focused, and draws the right notes out of Khanjian.

Kash the General reaches the heights needed for the play's final scene. As he terrorizes those around him, with seemingly the same psychological violence exerted in the field, the awful climax reaches full pitch. Williams has some shining moments as the fast-talking bureaucrat in these scenes. 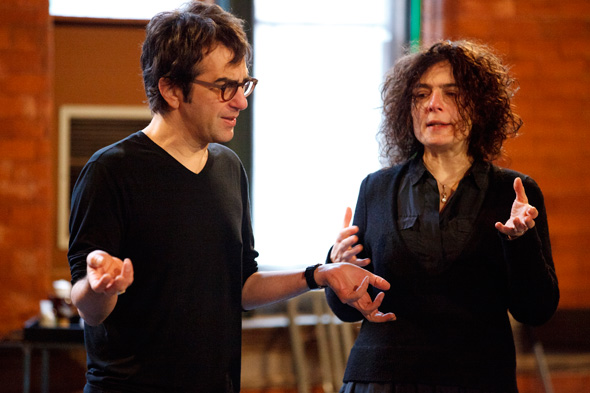 Egoyan navigates Crimp's text well, bringing clarity to some of the abstract moments in the script. His use of shattered glass punctuates the right notes, and the integration of live video is, as would be expected from the Academy-Award nominated director, a highlight. The mis-en-scene in general though — the stark set, distracting lighting, and cruel sound — doesn't service the play.

It's unbalanced, no doubt, with the missteps overshadowing the aspects that shine. The strong thrust of the second section almost makes up for how we arrived there, but not quite.

Cruel and Tender, written by Martin Crimp and directed by Atom Egoyan, runs at the Bluma Appel Theatre until February 18.