There are a wealth of interesting strands tied together in Jesus Chrysler, the newest show from Praxis Theatre. Eugenia "Jim" Watts rehearses Clifford Odets' Waiting for Lefty (a controversial play about organizing a labour strike), two women keep their relationship hidden from the world, and in the coming years Watts will be the sole female ambulance driver in the Spanish Civil War. All of these plot lines are compounded by the decade in which the action takes place: it's the 1930s.

It's even more disappointing then, that these rich topics get lost in a muddled script that never really reaches full speed. As a consequence, the confusion is felt in the direction and performances â themselves as illusive as the playwright's purpose.

Jesus Chrysler profiles the relationship of Watts and Dorothy "Dee" Livesay, a lesbian power couple trying to navigate their hidden partnership. Jim was an influential Toronto theatre artist and Dee a poet, who went on to become a two-time Governor General Award winner. Their relationship is tested when a young man enters the picture to deliver a telegram that will change each of their lives.

The women look back at the relationship from somewhere in the future, commenting and reflecting on the trajectory of their breakup. Playwright Tara Beagan privileges the voice of Jim who holds court for the first forty minutes of the play. There's no denying she's an interesting figure, but at bottom, she's unlikable. She cheats on her partner, uses her sexuality to seduce, and generally comes off as a boisterous know-it-all. 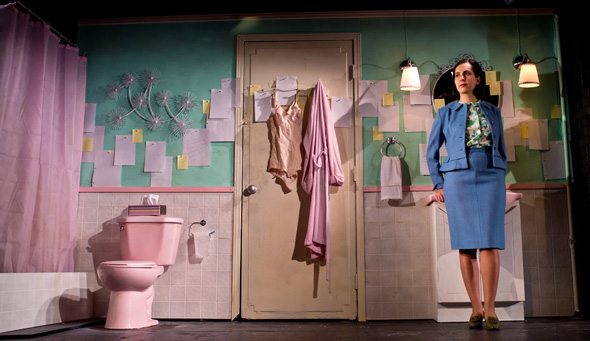 An examination of her behaviour as a cause of repressed sexuality would have provided an interesting perspective (at a time when homosexuality was, for the most part, hidden), but these connections are not fully developed. In the process, Dee fades into the background. We learn little about her and, sadly, aren't that interested. The close profile of Watts, rather than a deeper look at the relationship or the impact of Waiting for Lefty, falls flat.

The episodic script is elevated slightly with the use of pre-recorded dialogue and some eerie lighting, but director Michael Wheeler doesn't do enough to navigate through the often confusing temporal jumps.

The set design from Scott Penner is the most memorable element of the show. In peeling back the upper wall in the tiny studio and implanting a bathroom and living space over the main action, Penner doubles the staging possibilities. Unfortunately, the lights are dim on this section for the majority of the first half.

Both Margaret Evans and Aviva Armour-Ostroff struggle to find the right tone of Jim and Dee's relationship. It's hard to care about their struggles when we see so little of their affection for one another. All in all, we're felt with the feeling that there's more to be told about the relationship between these strong women.