The National Ballet of Canada has chosen a timeless tale in Romeo and Juliet to launch the 60th anniversary of the company. As much as the dance is about the agony of forbidden love, it's also a portrait of relationships with friends and family. In short, Shakespeare's story has it all.

Choreographed by Alexei Ratmansky, and with that haunting score by Sergei Prokofiev, Romeo and Juliet is a bonafide success that celebrates 60 years of world-class Canadian ballet. Ratmansky manages to create a varied and exciting programme that is as romantic as it is technically beautiful. The principal dancers, Elena Lobsanova as Juliet and Guillaume CÃ´tÃ© as Romeo infuse an emotive energy into their steps before a rich set design from Richard Hudson.

The story is danced over three acts that reach towards the eventual suicides of the title characters, after family feuding results in the death of Mercutio, Romeo's best pal, and Tybalt, Juliet's cousin. The lovers navigate their way from masquerade to secret marriage to the tomb which sets the scene for their final displays of blind devotion.

Ratmansky sets the love firmly in context; he avoids focusing on the pair alone. The first act is about family and when the curtain lifts on the masquerade (booming with Prokofiev's signature brass dissonance), Ratmansky presents to us a Capulet family that dances and duels with swords. It's an inspired choice — the swordplay emphasizes the violent thrust of each family, making it all the more volatile for Romeo and his paramour. While some of the early crowd scenes are less memorable, the party is the highlight of act one. 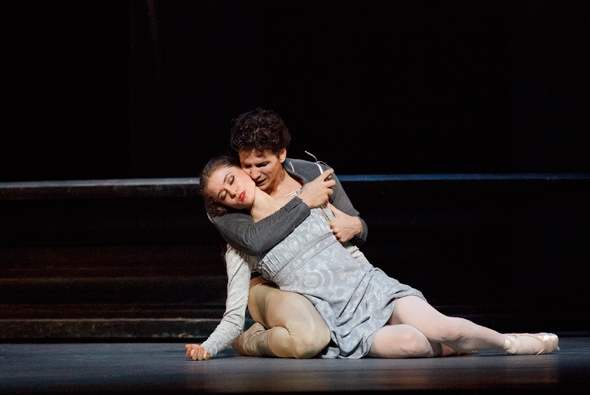 Friends and and the ties that bind feature strongly in this production — specifically, the deaths of Mercutio and Tybalt that result in Romeo's banishment. Here, Piotr Stanczyk as Mercutio comes close to stealing the show with his wit and charm. The drawn-out death scene is a clever spin on an already a foregone conclusion.

In the the third act, with all the other relationships having informed the final sequences, Lobsanova and CÃ´tÃ© are the sole focus. And they perform brilliantly. The scene where Juliet secures the serum that will deliver her out of her chamber is staged with innovation. Same goes for the dream sequences where the ensemble lift and support the couple as they float towards death. The production excels at storytelling without words; instead, it uses images and steps to translate meaning.

Hudson 's set design, with its evergreen and terracotta, provides an uncomplicated backdrop to Ratmansky's lyrical steps. There is nice symmetry with the costuming — muted for the street ensemble and opulent for the court.

It's hard to picture a finer celebration of 60 years in dance. Ratmansky's Romeo and Juliet leaps to the occasion.

--
Romeo and Juliet, with music by Sergei Prokofiev and choreography by Alexei Ratmansky, is presented by the National Ballet of Canada at the Four Seasons Centre until November 27.