Reviews of Love Lies Bleeding, inspired by the music of Elton John and Bernie Taupin, and 2 Pianos, 4 Hands, created and performed by Ted Dykstra and Richard Greenblatt

It's hard to pin down the pop music oeuvre of Elton John. Certain songs are deeply reflective, others speak of a journey, and some are just downright fun. If there's one thing that unites them all, it's that subtle is an adjective ill-chosen to describe their panache.

This philosophy is embraced wholeheartedly in the Alberta Ballet's Love Lies Bleeding, with choreography and libretto by Jean Grand-Maitre. The ballet is a pop extravaganza that dons Sir Elton's iconic sunglasses and takes off on a journey that travels as high as outer space and as low as the confines of the closet the singer once inhabited. With each song telling its own chapter, some are more effective than others at advancing the story. But, like watching the colours bleed and weave in a kaleidoscope, it's a visual feast that's exciting to watch.

Elton Fan (Yukichi Hattori) is our conduit to the memories for each dance piece. Hattori (alternating the role with Kelley McKinlay) brings astounding energy and technique as the stand out dancer. It can be said of the whole show — the technique and energy dominate, while the choreography is sometimes limiting.

When it reaches beyond, however, like in the Rocket Man and 60 Years On sequences, the dance is edge-of-your-seat engaging. The ensemble pulls together for demonic and drag scenes alike in astounding costumes from Martine Bertrand.

Loves Lies Bleeding works best when it reflects the up and down trajectory of Sir Elton's career — the songs that are so-so get lost in the shuffle, but the big and grandiose, and the small focussed duets, all score big. It's a dance celebration of the triumph of love over despair set to the palette of pop camp. 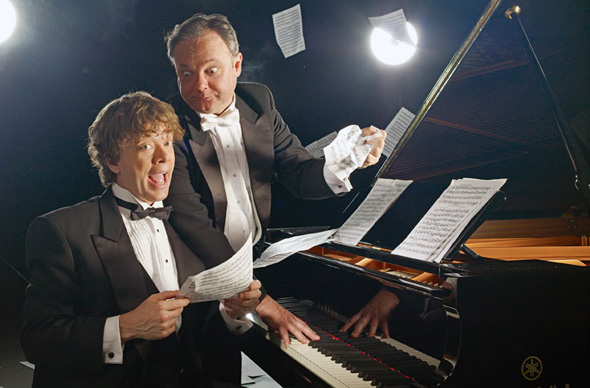 Ted Dykstra and Richard Greenblatt have toured the globe with a show about their love/hate relationship with the piano. An enduring, and somewhat haunting, feature of childhood memories spent indoors, the two actors explore the instrument on which so much of their early efforts were spent.

In 2 Pianos, 4 Hands, a seemingly simple story line blossoms into a thoughtful and enjoyable night at the theatre, featuring the acting and musical talents of the two artists. The show feels as upbeat and energetic as I picture its premiere in 1996 at the Tarragon Theatre.

Dykstra and Greenblatt, an Oscar and Felix type pair, face one another, each at the seat of a piano. They traverse memories of first classes, childhood competitions, and conservatory examinations by switching off and playing a host of characters along the way. I was struck with how honest their child and teenage selves are portrayed (playing young is not an easy feat for even the most adept performer). In these scenes, the two alternate between piano duties, with moments where they collaborate on a song proving to be a highlight.

The show works due to its universality. Anyone who has ever committed to learning a complex skill — be it an instrument or a language — can relate to the challenges explored in the play. With the piano, Dykstra and Greenblatt reach personal bests, but inevitably come to the realization that they will never make a career playing the piano. It's a heartbreaking inevitability, handled with impressive dexterity from the two creators.

The performers inevitably get the last laugh as playing the piano, not at Carnegie Hall but on stages all over the world, has been their bread and butter. Catch this one for Dykstra and Greenblatt's final performance.