Like the First Time is poetic on paper, uneven on stage

One Little Goat Theatre Company strives to move "towards a poetic theatre" with its onstage offerings. Their latest work, Like the First Time, written and directed by Adam Seelig, is modeled after Come Prima Meglio di Prima (Like Before Better than Before) by Luigi Pirandello. Seelig has written the play without formal punctuation. It most resembles a collection of words and phases artistically splashed across the pages of the playscript.

The piece rotates between the life stages of a woman named Fulvia (or Flora or Francesca depending on the person addressing her). Seelig has written an intriguing portrait of the protagonist that resists a singular perspective â she is at once a mother, a lover, and a wife. In its staging, however, the poetic nature of the dialogue loses ground, sounding as realistic as a household drama. The actors, at times, find moments of discovery within the poetry, but are held back by a second act setting that counters the strength of the initial ambiguity. 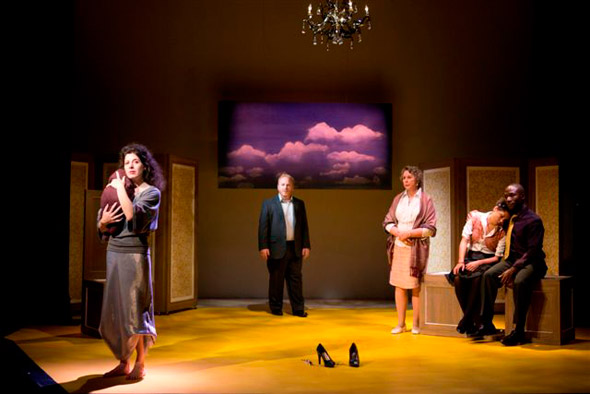 We first encounter Fulvia (Cathy Murphy) hanging from a chandelier, attached by a long scarf and outfitted in a patterned dress that covers the front of the stage. She is first entreated by her lover Marco (Dov Mickelson) who has returned after an absence. The love triangle becomes complete when her former husband Silvio (Andrew Moodie) asks her to return home. There, her daughter (Jessica Salgueiro), who believes her to be dead, is cold to her father's seemingly new wife.

At each turn, both Marco and Silvio compete for her attention, but it's the daughter and the newborn she's carrying that are the true objects of her struggle. The play harnesses an ethereal tone that allows for a blending of time and space. 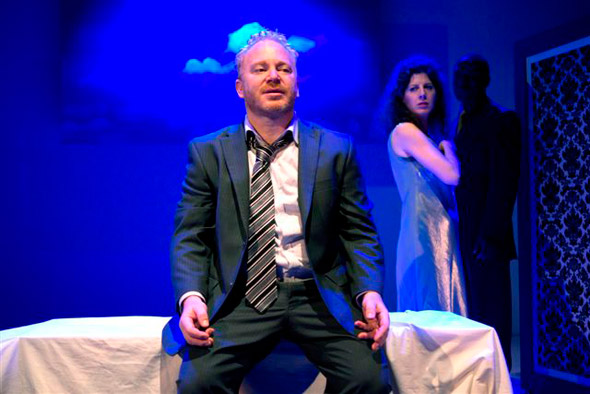 The initial scenes, where Fulvia floats between the memories of the two men, benefit from this ambiguity. The poetic dialogue feels most at home in this non-descript space. Here, Fulvia is established as the character from which all originates, and her control of that position generates traction.

Things unravel, however, when Fulvia returns to the home she once had with Silvio. The same ethereal tone that effectively reflected the poetry of the text vanishes inside the walls of domesticity. Fulvia is at the mercy of her daughter and Aunt (Elva Mai Hoover) in these instances, which seems to rob her of the agency cultivated at the outset. The play becomes less about Fulvia and her actions, and more about the other characters in her life. 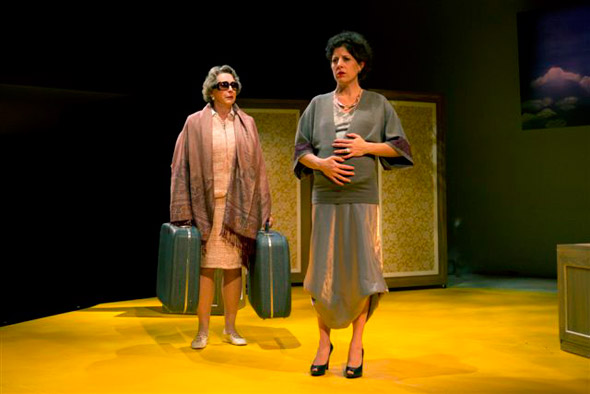 In these early scenes, Mickelson, as the determined lover Marco, finds the most depth in the text. He colours the language with a variety of different tactics to woe Fulvia back home. Moodie, as Silvio, also finds moments here or there where certain words punctuate, but is a bit forceful in positioning the husband as the man with the upper hand.

Murphy carries Fulvia well through the various scenes, oscillating from the delicate to the domineering. But the confines of the home undercut the original control she exerts at the outset. Thomas Ryder Payne creates a sound design that complements the script's ambiguity, and Laird MacDonald's lighting design is the stand out element of the mis en scene.

Like the First Time becomes uneven in the second half when Fulvia, the character at the heart of the show, is no longer the focus. Seelig has the makings of an intriguing script that works best when left ambiguous, but things fall apart without the central character to pull it all together.

Like the First Time, written and directed by Adam Seelig, runs at the Walmer Centre Theatre until November 13.