Want botox? The Ugly One is the cautionary tale for you

The Ugly One left me squirming in my seat. It's not so much the subject matter -- the importance we give to vanity -- but how quickly things can turn when taken to the extreme.

In our society, plastic surgery has become so commonplace that, for some, it's no longer sufficient to get a facelift or a boob job. We're enticed with ads for botox, liposuction, even penis enlargements and designer vaginas. Where will it end?

The Ugly One is an uncomfortably absurdist, biting comedy by German playwright Marius von Mayenburg, in the Theatre Smash production that just opened at the Tarragon Theatre. It revolves around Lette, a happily-married man (adeptly played by David Jansen) whose wife (Naomi Wright) has never told him how unspeakably ugly his face is. Nobody has.

And so he goes along in life, impervious to others' thoughts of him. That is, until his boss Scheffler (played by Hardee T. Lineham) turns him down for a major speaking engagement, favouring his younger, inexperienced assistant Karlmann (played by Jesse Aaron Dwyre). Scheffler is then tasked with telling him in no uncertain terms, how disastrously repulsive his face is, and that it would be professional suicide to let him represent the company.

Things get even stranger when Lette visits a plastic reconstructive surgeon who is also named Scheffler (and played by Lineham) to have a new face created. When the transformation is complete, he is a new man. 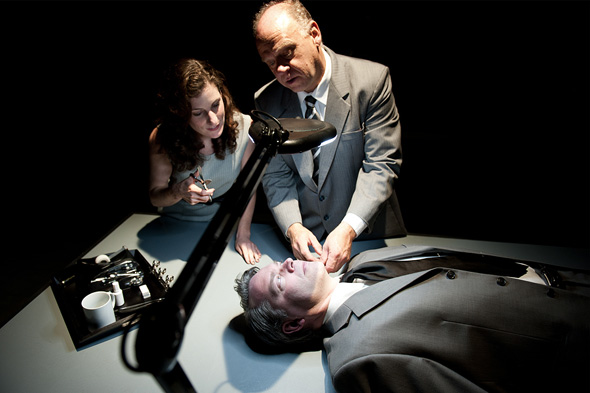 Fanny no longer looks at him askance and wants to jump him given any chance. As does the 73-year-old sexpot he meets at the next industry conference (also named Fanny and played by Wright) that he gets to lead after his boss's change of heart. Even the sexpot's mollycoddled son Karlmann (also played by Dwyre) -- in a Freudian nightmare of a character -- fancies him.

The absurdity takes on a new level when the conniving surgeon exploits his work to replicate "the perfect face" (Lette's face) on anyone who can pay. It's an artistic ambition that goes horrifyingly awry. Soon Lette's wife can't tell her husband from the guy in the park with the same face. Which makes poor Lette want his previous, "unacceptable" face back.

The Ugly One is one powerful cautionary tale for our time.

The direction by Ashlie Corcoran is effective at driving home this point, yet at the same time becomes bewildering, as the audience is often left wondering which character is which.

Subtle clues in lighting (by Jason Hand) and sound (by John Gzowski) help out. Yet some awkward staging (managed by Natasha Bean-Smith) and alley-like stage design (by Camellia Koo) serves to highlight our feelings of awkwardness throughout the production.

Watching three of four actors switching characters so rapidly -- at times mid-sentence -- makes for a challenging piece of theatre, for the actors and audience alike.