It's A Doll's House and Hedda Gabler that usually get all the attention, but Henrik Ibsen's Ghosts is just as chock full of questions about morality and human nature. It also centers on the plight of the woman inside the home, yet Mrs. Alving (Nancy Palk) is a healthy dose stronger than her Ibsenian counterparts.

The Soulpepper production, with adaptation and direction from Morris Panych, is a straightforward approach to Ibsen's play that takes a long time to get moving. When it narrows in on the relationship between Alving and her son Oswald (Gregory Prest) it illuminates century-old themes that still haunt us today.

The play is set before the backdrop of a celebration â Mrs. Alving is building an orphanage in the name of her late husband. Pastor Manders (Joseph Ziegler), a family confidante, presides over the opening and offers some moral guidance to a family he feels is firmly off the tracks. The arrival home of young Oswald, an artist studying in Paris, provides the progressive foil to Manders' fervent preaching. 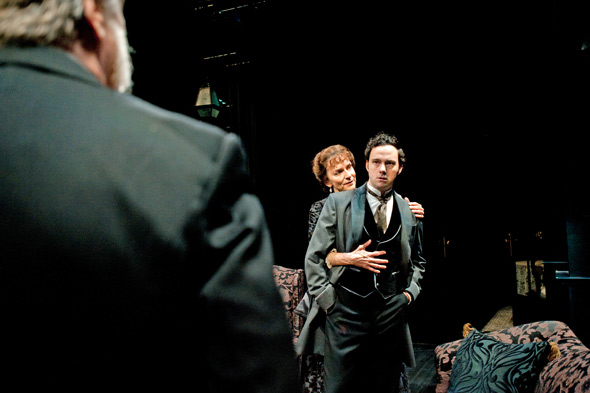 Add to the mix the servant Regina (Michelle Monteith) and her alcoholic father Engstrand (Diego Matamoros), and the right mix of timing and circumstance leads to the reappearance of the sexual daemons that haunt the Alving estate. Oswald's admittance to having contracted syphilis, the disease so taboo he dare not speak its name, shatters the last semblance of hope.

Panych opts for a slow and eventual build that pays off at the play's climax, but the consequence is a labourious first act. The scenes between Palk and Ziegler are played well enough, but lack the intensity needed to drive to the play into another gear. Manders' religious zeal is met with cold indifference from Alving, while her pleas to be heard just do more to confuse the Paster. The script seems to carve clear motivations for Alving, Oswald, and Engstrand, but leaves Manders and Regina feeling less than whole. 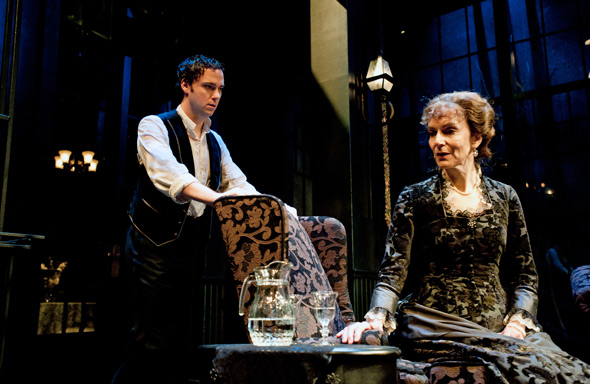 In the scenes between Palk and Prest, the ghosts alluded to in the first act creep into the drawing room. It's in these exchanges, not discussing their ghosts but seeing them take on new forms, where Panych finds the right note. The final thirty minutes, charged by the fate that belies the orphanage, are what he has been reaching towards all night.

Palk's performance is at times electric, but for the most part carries a measured tone slightly disconnected from the immediacy of her surroundings. When she's forced to respond to the grim reality of her son's condition, she rises to the occasion. Zeigler is a strong Manders, but ultimately gets lost in the shuffle once the charming Oswald arrives on the scene.

It's Prest as the young artist â ironically the character who's dying â that injects the most life into the story. He at once represents the family's hope for the future and its curse of sexual excess. Prest exudes all of the qualities, both positive and negative, that are spoken about Oswald, together with a genuine fear of dying before he can affect change.

Ken MacDonald carries the darkness indoors with a set that is a bit overbearing, yet provides some fitting visuals of the property behind the home. The ghosts arrive late for the unintentional seance, but once they do, it's a drama that belongs to Prest and Palk.

Ghosts, in a new adaptation by director Morris Panych, runs at the Young Centre for the Performing Arts until November 18.