At its essence, a game of Chess is a slow and measured battle of strategic intelligence, the goal being that you play a number of steps ahead of your competitor. It's a subtle game, marked by the maneuvering of the various pieces and the occasion tapping of the game clock.

The black and white board game, and the international tournaments wherein the world's best players battle for supremacy, is the inspiration for Chess: The Musical, currently on-stage at the Princess of Wales Theatre. The U.K. touring production incorporates not a hint of the game's subtleties in its production concept, opting instead for an overly bombastic treatment. The result is a cartoonish send-up of an already difficult to comprehend musical that very rarely makes a good move.

Intended to mirror cold war tensions between the United States and Russia, Chess zeros in on an international battle between two masters of the game, the American Frederick Trumper (James Fox) and the Russian Anatoly Sergievsky (Tam Mutu). The action turns from the chess board to the bedroom, as the two battle for the heart of Trumpter's longtime partner Florence Vassy (Shona White). In the second tournament of the musical in Bangkok (of all places), the consequence of all the bed jumping comes to pass with the arrival of Sergievsky's wife who arrives from Russia in time to sing of her pain.

If the musical sounds incredibly vapid, that's because it is. Clocking in at two hours and forty minutes, with a twenty minute intermission, there's a lot of singing about chess. That should be more than enough time to develop compelling characters with equally interesting arcs, but Rice's story never lifts beyond the metaphor that all the "playing" goes on beyond the board. Without a care for the characters, the bottom drops out and we're left to pick up the pieces. 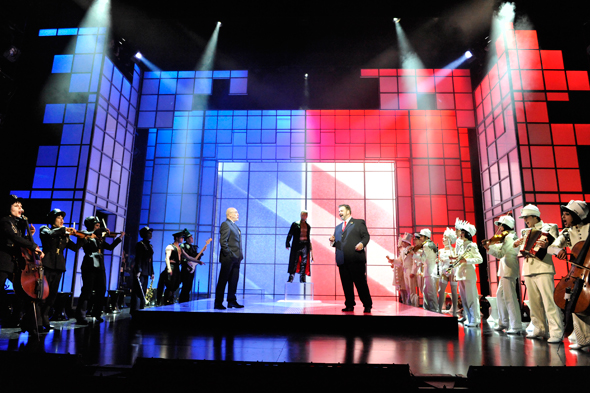 To compensate for a rickety and downright convoluted plot, director and choreographer Craig Revel Horwood goes overboard with an extravagant production concept. The chorus play intentionally sexualized versions of the game pieces before a clinical white set, lit with every colour under the rainbow. The concept could very well enhance, or at least distract, from the storyline, but the chorus members are merely pawns, not utilized during the scenes with actual chess playing.

The Arbiter (David Erik), outfitted like a character from The Matrix after dark, sleeks across the stage with his bare chest puffing out from beneath a full-length leather jacket. The character would seem out of place, save for the fact that the chorus members exert the same overly sexual energy. His solo number, also titled "The Arbiter," is so full of clichÃ© choreography that it's the low-point in the show — it happens at just moment you're hoping things will get better.

It's not all bad play. Just about every cast member plays an instrument, with the chess chorus wielding strings, brass, and woodwinds. It's a neat little convention that, thankfully, gives the chorus something to do in addition to acting their piece. The songs that work best are those stripped down from the large and loud approach — Fox on acoustic guitar and White solos. These moments of subtlety bring much needed attention to character.

Mutu is a commanding Anatoly, and the production benefits from his steadfastness. It's a shame that his wife, played by Rebecca Lock, doesn't appear earlier in the musical. Her presence brings some much needed immediacy to the love quadrangle and Lock does a good job putting a human face on Anatoly's infidelity.

They say in sport that it doesn't matter if you win or lose; what matters is how you play the game. Horwood gambles — a strategy more akin to playing poker not chess — on an over-the-top production concept that doesn't play out.

--
Chess: The Musical, with music by BjÃ¶rn Ulvaeus and Benny Andersson and lyrics by Tim Rice, runs at the Princess of Wales Theatre from September 24 - October 30. Tickets are $20+.