Reviews of I Send You This Cadmium Red, directed by Daniel Brooks, and Hardsell, performed and written by Rick Miller

Daniel Brooks and Rick Miller are giants on the Canadian theatre scene. As director, writer, actor, and producer, Brooks offered his creative energy to some of the most memorable productions of the last two decades. Miller, also an actor and writer, is one of the countries leading performers. Often collaborators, each has a play opening this week with a limited run on Toronto stages: Brooks directs I Send You This Cadmium Red at Canadian Stage, and Miller remounts Hardsell at Factory Theatre.

A meditation on artistic impulse, collaboration, and colour, I Send You This Cadmium Red celebrates the achievements of composer Gavin Bryars in two parts.

The first is a pas-de-deux from choreographer James Kudelka called Soudain l'Hiver Dernier, scored to Bryars' famous Jesus' Blood Never Failed Me Yet. Bryars' composition seems simple on first pass - it's of a homeless man singing a short stanza. When played on loop, it becomes a rich tapestry filled with underlying emotion. Kudelka pairs the striking piece with a dance reflective of the song. Two men, attired like blue-collar workers, are linked together throughout. They provide shelter for one another and traverse the stage distinctly together. At the moments they separate, they seem less surefooted. It's not a relationship built on love, but one borne of need.

The dance resembles Beckett's tramps on the hill — both characters long for autonomy, but inevitably must rely on each other for survival. Kudelka creates a subtle portrait of the plight of the working class that compliments Bryars composition. It's a fitting realization of the haunting song performed with skill by the two dancers.

I Send You This Cadmium Red, which lends its name to the title, is the more substantial of the two pieces. The dialogue is based on correspondence between painter and novelist John Berger and painter and filmmaker John Christie. In a series of letters, the two men debate — in both colloquial and academic terms — the essence of colour. I use the word essence because colour, in their terms, spills beyond the standard wheel in considering darkness and light. Each letter is scored to a Bryars piece and complimented with stunning visuals courtesy of Bruce Alcock.

The combination of music, images, and philosophical musings make for a rich palette. The more colloquial descriptions of colour from Berger, performed with delightful wit by Julian Richings, seem all the more accessible than the quotable quotes posited by Christie, played a little too rose-coloured by John Fitzgerald Jay. It's a highly elevated study into aesthetics that provides a feast of inspired thinking. While there are moments that feel a bit too flowery or a bit too jargony, the resulting discussion is a lovely one to be thrust into. The major accolades here go to Alcock and Brooks — Alcock provides the visuals needed to hold our attention, and Brooks resists the temptation to do more, letting the parts lift the whole. 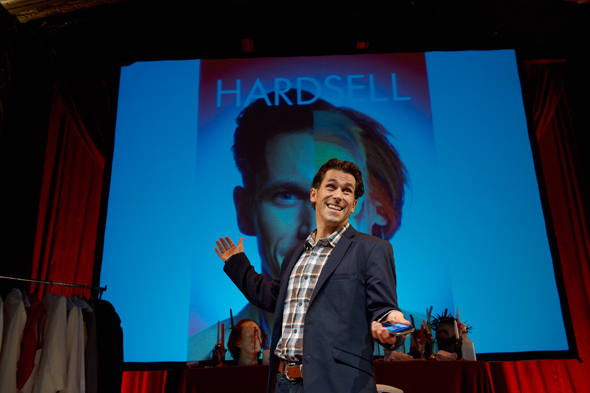 Hardsell is a remount of the 2009 show created by Miller and Brooks, albeit with Miller firmly in the driver's seat. The show has been reworked after a lukewarm reception the first time around. It offers a more nuanced approach to the commodification of, well, just about everything, positioning cynicism in opposition to hope.

The Arnie character, a traveling salesman of sorts, is the embodiment of the nihilism at the heart of the original show. In this version, Miller has taken back control from Arnie, using him as an intense foil to the playwright's call for restrictions and boundaries that work to limit capitalism not crush it completely. Miller starts by outlining all the ways in which he sells and promotes himself — there's no guise that he operates above the system. While Arnie is given a substantial soapbox on which to counter Miller's altruism, it's the actor's philosophy which bookends the play.

It takes some time to get there, but the new dynamic between Miller and his alter ego provides strong tension to the complex relationship between human nature and greed. If there is one undeniable observation about the play, it's that Miller believes strongly in the goodness of humankind. That investment brings immediacy to the work that can be felt when Miller appeals to our sensibilities and repositions the eco-friendly carpet that Arnie has torn apart.

Hardsell reaches towards Peter Brook's rough theatre, with all its noise and action, in its popular appeal to value hope over the idea that all actions are selfish. While a consequence of this rough quality means the show is not as tight, with long pauses for change in tone and a lecture kind of presentation, Miller's voice can be heard over Arnie's din. With impending occupations in cities around the world in support of the values of which Miller extols, the play is a timely call to action.