MacHomer marries Shakespeare and the Simpsons

It's no secret that a large portion of the population has deep disdain for the fanciful language of the world's most celebrated playwright, William Shakespeare. "Thee"s, "thou"s, and noble subjects seemingly far removed from the realities of modern life all seem to alienate spectators who find three hours of dense verse like nails on a chalkboard.

Enter Rick Miller. The Canadian funnyman has been touring a most awesome hybrid for well over a decade now. His show, MacHomer, marries the old world pop-culture of Shakespeare with the most-quotable sitcom of our time, the Simpsons.

Miller retells Macbeth casting over fifty Springfield characters in the Bard's roles. It's one of the most inventive interpretations of Shakespeare this country has seen. After 10 years, the show is starting to show its age a bit. Yet there is little denying that the mashup is as good as a jelly-filled donut topped with sprinkles. That the show still triumphs is a testament to the uncanny impressions and sheer energy of its star.

Miller chops Shakespeare's play into a manageable 75-minute retelling. All the main elements of the story are here: the rise from Thane to King, the prophesying witches, and the wife that drives her husband to murder. Those with a Shakespeare shorthand can sit back and enjoy Miller's expertise on all things Simpson. I'm not so convinced that students unfamiliar with the script would be able to make their way through it, but it has always seemed like more of an adult show to me (much like the sitcom from which it came). 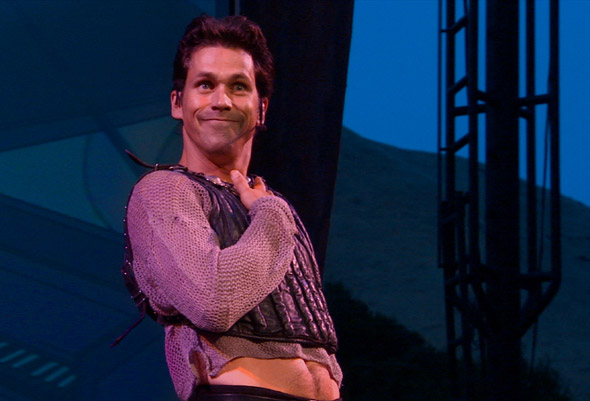 One of the most enjoyable elements of the performance, for those who know both narratives, is seeing the play cast before your eyes. Ned Flanders as Banquo, Mr. Burns as Duncan, and Krusty as the Porter are all incredibly inspired choices. The secret to the play's success is that Miller allows the Simpsons folk to retain their individual traits â Lisa criticizes the license taken with Shakespeare, while Bart has no interest in the Bard.

While the script successfully joins verse, Springfield prose, and some self-referential interruptions, it's Miller's masterful performance that has made the play a hit. I cannot picture a better mimic, musician, and actor who could drive home such a nuanced piece of work. You see it most succinctly in his portrayals of Marge as Lady M and Barney as McDuff â if you close your eyes, you could very well be listening to an episode. 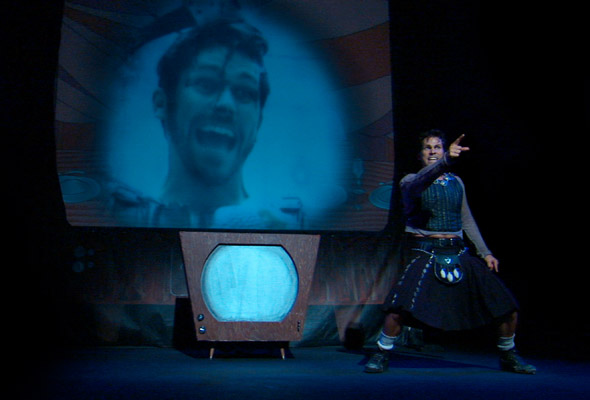 Aside from Miller (and there is very little aside from Miller), the opening sequence looks a bit dated and the set design is uninspired for such an over-the-top show. While the hand-puppet summary separating the first act is delightful (again, Miller), the time could be better spent on teasing out more scenes from the play. Finally, while the encore from Miller's personal repertoire is as enjoyable as it was the first time I saw it, it feels like the kitchen sink in an already crowded production.

--
MacHomer, created and performed by Rick Miller, is playing at Factory Theatre from September 13th - 25th. Tickets are $20-$40.