The 2011 Fringe Festival is set to bring Toronto the 12 most exciting days of theatre to be had this year. With over 150 productions spread throughout 30 venues, the Fringe is a shining gem in the summer arts calendar. And the festival continues to expand. In addition to workshops, talk backs, music, and performance of every kind taking place at the Fringe Club (Honest Ed's at 581 Bloor St. W.), the festival adds visual art to its roster this year with Visual Fringe, original work from eight artists.

With the hit or miss factor incredibly high, it's tough to predict which shows will be fringe darlings in 2011. Here are my festival picks for this year:

When Harry Met Harry / Tarragon Extra / Fringe Guide 1, Page 19
Set in the confines of an office, Harry is a solitary man, dedicated to perfecting repetitive work-related tasks (I think we all can relate). After a Personal Development Workshop, Harry's straight and narrow routine starts to crumble. Australian Allan Girod brings Harry to Toronto, after previous success with The Good Thief in 2009.

Bloom / Bathurst Street Theatre / Fringe Guide 1, Page 20
An adaptation of the critically-acclaimed poetry collection from Michael Lista, Bloom takes place in 1946, less than a year after the atomic bomb was dropped on Hiroshima. When testing the unstable centre of a nuclear bomb, a lethal dose of plutonium threatens Canadian physicist Louis Slotin. This fusion of poetry and science could prove reactive if the adaptation makes the right jump from page to stage. 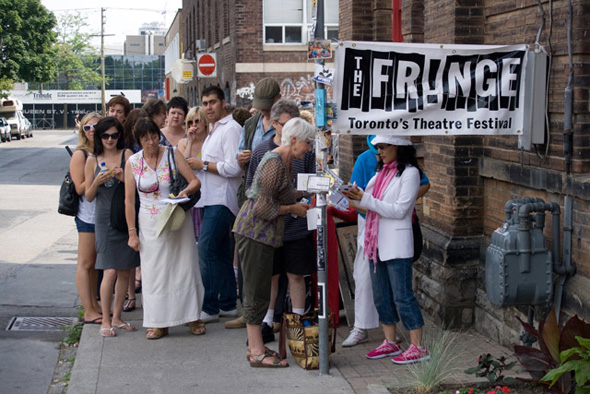 She Said What Happened / Bathurst Street Theatre / Fringe Guide 1, Page 22
Proving that women are every bit as funny as men, Canadian Comedy Award nominated She Said What has been tearing up the Toronto comedy scene. With cast credits on the Comedy Network, This Hour Has 22 Minutes, and Second City to prove their mettle, She Said What offers a broken down cabaret with a cascade of characters for their Fringe debut.

The Soaps - The Live Improvised Soap Opera / Bathurst Street Theatre / Fringe Guide 1, Page 22
The National Theatre of the World are some of Toronto's most bankable comedic improvisers. This time around, the troupe will spin a yarn full of intrigue, drama, and romance as they improvise a soap opera taking you behind the scenes of the Stratford Festival. Each night will yield different results, but the calibre of the talent means the show should be a good one.

Headscarf and the Angry Bitch / George Ignatieff Theatre / Fringe Guide 1, Page 32
It's a pretty stellar title, you have to admit. Zehra Fazal from Washington, D.C. as Zed "Muslim Weird Al" Headscarf takes us on a tour through Islam in America. Religion, family, sex, love--she claims to hit every hot-button topic. Claiming that hyphenated-citizens from any culture will relate to the search for identity, Toronto is an appropriate spot for Fazal's comedy.

Bursting into Flames / Robert Gill Theatre / Fringe Guide 2, Page 49
A veritable Fringe veteran from all the major and minor spots in North America, Martin Dockery lights up Bursting into Flames at this year's festival. The show is billed as a divine comedy of a soul lost in paradise. This New York native has been praised for his high-energy storytelling abilities.

Tyumen, Then / Robert Gill Theatre / Fringe Guide 2, Page 51
It's July 4, 1941. The Americans are celebrating their independence, but in Russia the body of Vladimir Lenin makes a hasty voyage from Moscow to Tyumen, Siberia. Under threat of invasion by the Nazis, two confined soldiers escort the (rousing) corpse to safety. With a strong cast and sound director, this quirky satire has all the makings for Fringe. 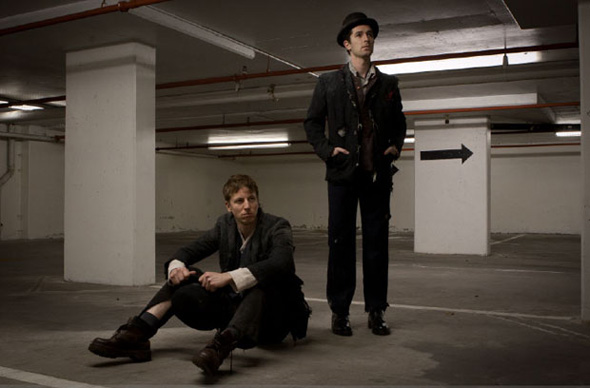 The Godot Cycle / Honest Ed's Parking Lot (581 Bloor Street W) / Fringe Guide 2, Page 67
The Godot Cycle is Waiting for Godot on loop--it never ends. Two actors perform the play without stopping for two marathon performances: 30 hrs and 54 hrs. You have to give these performers credit, that's a lot of existentialism. They never leave the stage. The show advertises that audience members can arrive anytime you like, stay as long as you want, and re-enter the performance. The box office will be located in the parking garage below the Honest Ed's parking lot and will be open for the entire 30 hour and 54 hour time slot of the performances.

The Love Octagon / Theatre Passe Muraille Mainspace / Fringe Guide 2, Page 52
Chris Craddock usually brings a winning production with him whenever he visits Toronto (BASH'd, Moving Along). This year, he pairs with Ron Pederson in an improvisational play on the topic of love. The octagon in this case are the eight characters that make up the four couples featured in the show...who are all sleeping together. Simple enough.

Swoon! / Factory Theatre Mainspace / Fringe Guide 2, Page 61
Boasting an impressive collection of Toronto actors, Swoon! is the newest offering from talented writer and director, Jason Maghanoy. In this exploration of all things love, Swoon! considers that enraptured state of being that overtakes when the heart skips a beat or butterflies battle for stomach space. The youthful cast guides us through stories of meeting, staying together, falling apart, and meeting again.

Dungeons and Dragons, (not) The Musical / Snakes and Lattes / Fringe Guide 2, Page 66
It'll be interesting to see Snakes and Lattes serves as the site-specific playing space for Dungeons and Dragons, (not) The Musical. The exciting and entertaining Praxis Theatre presents this non-musical for the D and D uber-geeks and board game fans a like. Will the humans, dwarves, elves, and halflings all get along? You'll have to roll the dice to find out.

Shotgun Wedding: The Musical / Alexandra Park Community Centre / Fringe Guide 2, Page 70
Cue the trucker hats and Britney Spears anthem, Shotgun Wedding: The Musical makes its way to a trailor park near you this Fringe. Directed by the accomplished Catherine Hernandez (Singkil, The Scarborough Stories), Shotgun is set before the "paisley and rayon" of 1990s Mississauga. If the nostalgic palette wasn't enough, the musical showcases 90s R&B, spoken word and movement.

The Toronto Fringe Festival runs from July 6 - 17. Visit the Fringe website for tickets, event times, and complimentary programming that runs throughout the festival. Download a complete Fringe Festival Program Book to plan your own viewing schedule.