The Winter's Tale a summer treat in High Park

The Winter's Tale might seem like an odd choice for Dream in High Park, an annual summer gem from Canadian Stage. But this intriguing play, one of Shakespeare's late romances, blends the chills of tragedy with the warmth of a comic reconciliation. Canstage's production suffers slightly from cuts made to have it clock in at a cool 90 minutes, but is ultimately an enjoyable interpretation fit for theatre in the park.

The action begins in the kingdom of Silicia where jealous tyrant Leontes (David Jansen) wrongfully suspects his pregnant wife Hermione (Kelly McIntosh) of adultery with his best friend Polixenes (Sanjay Talwar). He prosecutes his wife to the full degree, ignoring a spiritual decree from Apollo which proclaims her free of wrongdoing. His ignorance results in the death of his young son (from grief), the banishment of the newly born baby (the supposed bastard), and finally, the death of his wife. 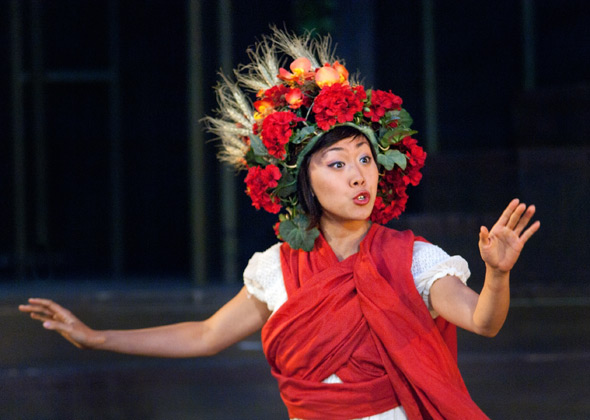 The second half of the play takes place 16 years later in the Kingdom of Bohemia where the banished baby is now a young woman named Perdita (Jasmine Chen). She has started a dalliance with Prince Florizel (Thomas Olajide), son of Polixenes, who, through a number of plot twists, returns her back to Sicila. In the final scene, father, daughter, and mother are reunited when the statue of Hermione comes to life.

In the initial setting of Sicila, the action hurries along at a rapid pace. It is here where cuts to the script hurt Jensen's ability to ramp up to Leontes' jealousy â one of the most challenging character turns in the canon. While the choice to make the audience the confidante to the character's madness is a strong one, his suspicions come at us much too quickly. The same can be said for the moment after Hermione's death. Jensen's grief-inspired turn just doesn't have enough room to settle and comes off as disingenuous.

Still, the scenes are expertly woven together. Director Estelle Shook creates strong stage pictures, utilizing many levels of the High Park setting. Her decision to underscore the dialogue with music composed by John Millard elevates the material in the outdoor space. Of the actors, McIntosh is the stand out of the first half. She finds the right balance between anger and grief as Hermione stands on trial.

The move to Bohemia is where the play really hits its stride. A sheep shearing festival serves as the occasion for merriment. In these scenes, John Blackwood as Autolycus, a one time servant to Prince Florizel, truly sings for his supper. Blackwood lifts the energy from the sadness of the first half and steals his way into our hearts. George Masswohl is also strong as the Old Shepard. The singing, dancing, and disguises of the Bohemia setting all help carry the play towards its eventual conclusion.

The final scene pulls both worlds together. Jason Hand's lighting design makes Hermione appear truly angelic and Shook's staging creates a memorable final picture that is the highlight of the show. These types of moments, full of wonder and magic, are why we go to the theatre â to dream, to inspire, to believe.

A bold choice for the Dream, The Winter's Tale is a delightful departure from classic comedies which more than holds its own under Shook's direction. Don't let the title fool you, this year's Dream is a delightful summer production built for wonder under the stars.