Marat/Sade a wicked piece of theatre

Marat/Sade is Soup Can Theatre's adaptation of Peter Weiss' drama-musical (full title: The Persecution and Assassination of Jean-Paul Marat as Performed by the Inmates of the Asylum of Charenton Under the Direction of the Marquis de Sade). It's delightfully wicked.

If that's not a strange enough concept for a play, envision director Sarah Thorpe's take on it. She has changed the setting to McGill University's psychiatry department circa 1957, where Dr. Donald Ewen Cameron -- the first chairman of the World Psychiatric Association -- conducted psychologically torturous experiments on un-consenting patients.

These experiments were conducted under the umbrella of a covert CIA operation which sought to explore the possibilities of mind control, memory erasure and involuntary information extraction. The production explores the contextual and thematic parallels between Marat/Sade and this dark chapter of Canadian history.

The high voltage electroshock "therapy" scene had me cringing in my seat. But the production is much more than shock and awe. It's rife with witty dialogue and catchy tunes (under the direction of Pratik Gandhi) sung by a talented foursome and half a dozen or so musicians (including flute, trumpet and tuba). 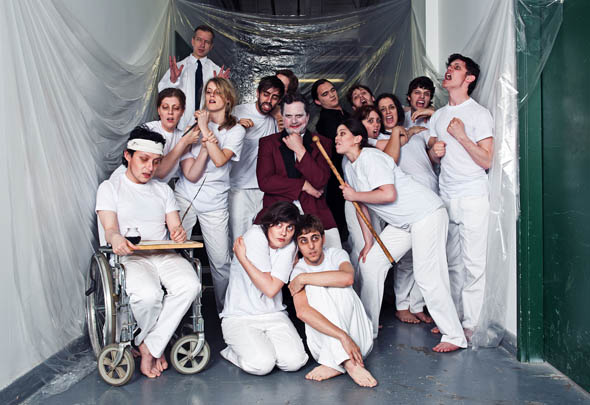 Assigning each inmate a particular psychological condition made their characters believable. I felt rather sympathetic to them by the time the lunatics had taken over the asylum.

Allan Michael Brunet's de Sade, with his sharp nails and evil ever-present snarl, plays well off Liam Morris' conniving, scheming literate wit of Marat. Although at times Morris' voice was the only one out of the commendable cast to get drowned out by the air conditioning -- likely working full-blast in the Alumnae Theatre on the hottest night of the year.

I found Morris' demeanour was a little too passive altogether. With sunken eyes and a morose outlook, his brooding look sometimes reminded me of Mr. Bean. As he sat in a bathtub most of the show, bathing in what we are to believe is his own blood, perhaps this explains it.

Still, it's an entertaining, if unconventional piece of theatre. But if Soup Can Theatre really wanted to reinterpret the classic work for a 21st century audience, perhaps they should've stripped the French revolutionary theme altogether and set it in the temporary holding cell during the G20 summit in Toronto.