Dolly Parton's 9 to 5 given the musical treatment

If there was a theme park called Dollywood, this is what it would look like. Leaning heavily on the Dolly Parton "aw shucks" image to carry it through, 9 to 5: The Musical has its moments but can't overcome a flimsy adaptation from screen to stage.

Inspired by the 1980 film featuring Jane Fonda, Lily Tomlin, and Parton, the touring production, presented by Dancap at the Toronto Centre for the Arts, doesn't deviate from the original. Three working women take on the old boys club when they kidnap their sexist, pig-headed boss and run the office with compassion and charisma. Patricia Resnick's script is the real let down here. The wooden dialogue leaves little room for dimensionality.

The material is buoyed by its namesake when Parton appears in pre-recorded video that starts and ends the show. Parton, who wrote the music and lyrics for the musical, pens some charming songs to accompany the story, Heart to Hart and One of the Boys being the standouts, but the other numbers fall short of the quality of the title tune. Here for You, sung by the chauvinistic boss Franklin Hart, Jr., is probably the only song in the musical theatre canon focussing on the attributes of Double D cups. 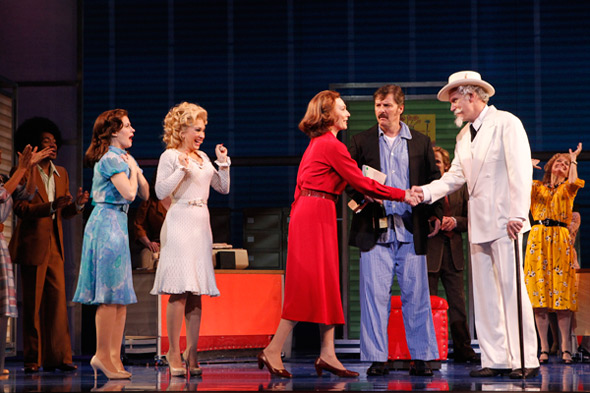 Dee Hoty as Violet, the aging office manager long passed over for promotions in favour of her male colleagues, does an admirable job of holding things together. Her cynicism continually elevates the lackluster material. Also delightful is Mamie Parris as Judy, the recently divorced secretary who can't work a photocopier to save her life. She carves out some memorable moments and is the only real character with a compelling journey.

The third member of the female brigade is Doralee Rhodes, the bright-eyed country girl originally played by Parton in the film. Diana DeGarmo, runner-up in the third season of American Idol, brings incredible musical talent to the role. But in trying to mimic the iconic songstress, she overshoots and lands somewhere closer to Betty Boop. Like the rest of the material in its desire to mirror the film, a fresh take would have been a welcome change. 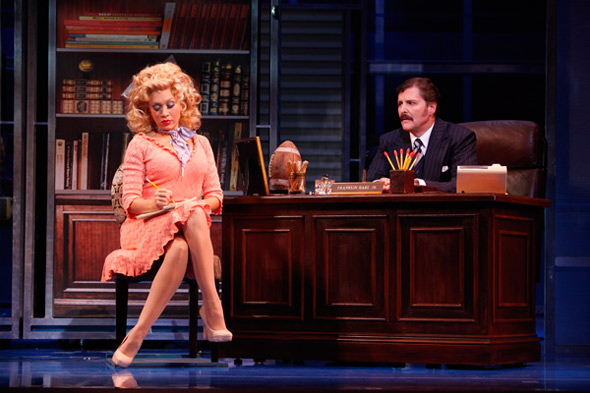 Also memorable is the overly-sexed assistant to the CEO, Roz, who harbours a secret love for her boss. Kristine Zbornik makes the most of her stage time in the character role. Joseph Mahowald comes up short as the object of the women's scorn, Franklin Hart Jr. With big shoes to fill (Dabney Coleman played it to perfection in the film), Mahowald often borders on stereotype rather than a fully-formed jerk.

The show's best material comes when the three women--Hoty, Parris, and DeGarmo--are left to their own devices with a majiruana cigarette. In the dreamlike haze of the relaxant the woman present their own scenarios for getting revenge. The playful quality of these numbers, from film noir to country hoe-down to fairly tale potion, provide stark contrast to the confines of office life that are largely overplayed.

Act two doesn't carry the momentum of these earlier scenes, but, as can be assumed, the plot wraps up neatly and nicely enough. The sets by Kenneth Foy are one of the production strengths and serve to emphasize the 1979 setting. The running joke about primitive technology, however, "something called an answering machine," could have been left out.

9 to 5 doesn't take itself too seriously, and it's easy to delight in the campiness of it all. But with little innovation in its translation to the stage, the routine work day might feel more like overtime.