Carrie Fisher on Hollywood and the perils of celebrity

Imagine yourself forever immortalized in the hearts and minds of moviegoers as an intergalactic princess with a cinnabon hairdo. The early role that catapulted Carrie Fisher to stardom makes its presence felt in her one woman show Carrie Fisher: Wishful Drinking, a chronological journey through the crises of a Hollywood icon. Fisher's autobiographical play (more like an extended conversation with the audience) is a compelling journey of acceptance.

The play is based on the book of the same title, which visits the pivotal moments in the actress's up and down career. She describes her time in rehab at the hands of prescription drugs, the diagnosis of her bi-polar disorder, and her marriage to Bryan Lourd, who left her for a man. If there is one thing you can say confidently about Fisher, it's that she's had a tough go of it.

All these challenges would make for a depressing night at the theatre. Yet Fisher's brings to bear an uncensored telling that relies on finding the humour in every one of her dark periods â she opens the show singing Happy Days Are Here Again. You get the sense that this is the most fitting way for a performer to wrestle with her demons, to bring them on stage for all to see. 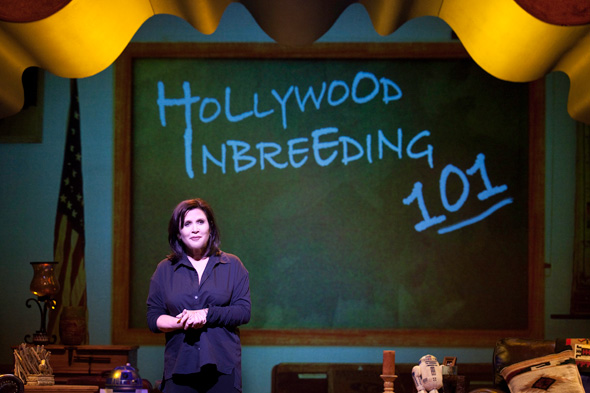 Fisher's upbringing was the stuff of Hollywood royalty. The daughter of actress Debbie Reynolds and singer Eddie Fisher (who left Reynolds for Elizabeth Taylor), Fisher details the celebrity personalities that surrounded her. If it takes a village to raise a child, her village was filled with adulterous characters with little care for long-term relationships. Fisher's explanation of these complicated relationships, in a section she calls Hollywood Inbreeding 101, is the highlight of the show.

She describes the post-Star Wars period filled with stalkers, the fantasies of teenage boys, and every type of merchandise possible. She even invites a member of the audience to the stage to try and seduce the Princess Leia sex doll. While she jokingly proclaims she'd like to "thank George Lucas for ruining my life," you have to wonder how much truth there is in her statement. 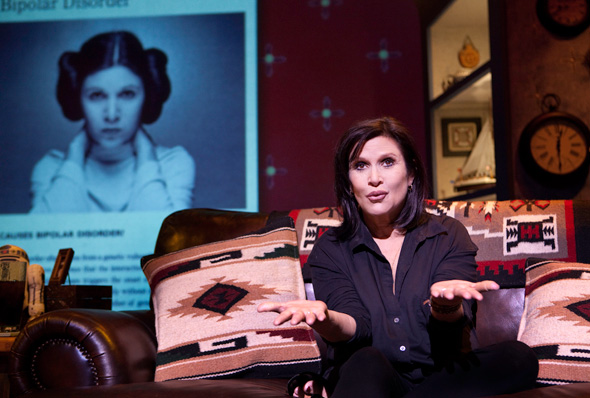 Fisher aims for a genuine rapport with the audience inviting questions, singling out specific members, and liberally throwing glitter across the front row. This frankness serves to invite the audience into her living room--reflected in the cozy set complete with Star Wars memorabilia and kitschy trinkets. Her relaxed delivery elevates the show beyond a strict personal portrait.

Not all of the stops down memory lane hit the mark. The second act can't seem to harness the energy of the first and while her suggestion that bipolarism should have its own pride parade breaks down the stigma of mental illness, her description of electroconvulsive therapy borders on the awkward.

Yet her core message, that "if you can claim something, you can have far more power over it," resonates strongly from a woman who practices what she preaches. Fisher's play never feels like a celebrity indulging in unnecessary self-reflection. If the reward of all that struggle is being able to share it in such a delightful way with audiences, then Fisher succeeds at translating all that pain into triumph.