Bullet for Adolf misses the mark

After a generous Toronto love-in, Woody Harrelson's highly anticipated production has arrived at the Hart House Theatre. If you can say one thing about Bullet for Adolf, it's that it has an indelible and charming goofy-grinned swagger — and little more. The play proves to be an entertaining first pass about the summer of 1983 in Houston that offers cleverly written zingers, but lacks a fully realized plot with a meaningful focus.

The play centers on the relationship between roommates Zach (Brandon Coffey), Frankie (Ronnie Rowe), and Clint (David Coomber) who bunk together for the summer. Zach and Frankie work construction for their curmudgeon boss, Jurgen (Thomas Gough), whose only redeeming quality is his charming daughter Batina (Vanessa Smythe). The other characters thrown in the mix include Dago-Czech (Billy Petrovski), a fast-talking, suit-wearing construction worker, Jackie (Tashieka McTaggart), a love interest for Frankie, and Shareeta (Meghan Swaby), Jackie's fiery friend.

After a slow start, the play shoots into a higher register when everyone turns up at Batina's birthday party. It's here that Harrelson and Frankie Hyman's script shows the most potential. The clever dialogue clips along fast and furious. Yet, its joke-laden focus — from pedophiles to Nazis — leaves little room for engagement with a meaningful issue. The characters debate the racial politics of the early 80s, but it's a non-starter.

Unfortunately, it's a recurring symptom of the play — just when you think they're approaching a significant subject, a quick retreat is made. These false plot focuses make for all potatoes and little meat. 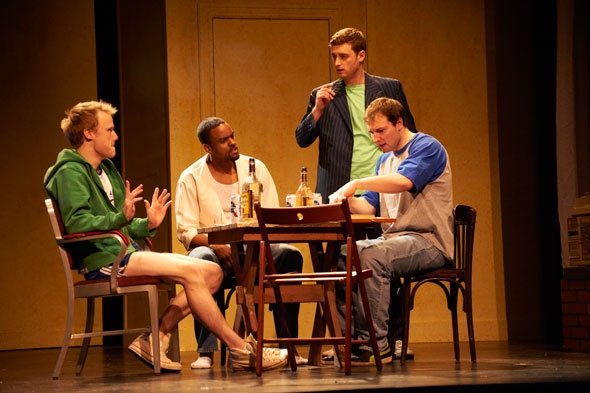 Once the gun appears, and the connection to Hitler is established, the play turns Agatha Christie on us, but with no corpse to hide, the stakes remain low. While the playwrights sketch an array of likeable personas, we know little about them. It's no wonder that at the "kum ba ya" conclusion, we're left wondering how we got here and for what.

In the hands of lesser actors, the comedy might have fallen flat. But it's a testament to a few standout performances that the play delivers laughs. Coffey, as the "ain't got a care in the world" Zach, holds things together. Swaby provides much needed fire to Shareeta, and Coomber delights as the intense and frenzied Clint.

There's a moment in the play where Frankie describes a performance of "I've Gotta Be Me" by Sammy Davis Jr. at the Apollo. He marvels at the way it exudes every inch of the singer's unique personality, endearing him forever to those gathered.

Bullet for Adolf might just be Harrelson's "Gotta Be Me" — it's at times clever, brash, high on the fun factor, not afraid to double-dip, and seemingly unconcerned with the heavy stuff.