It's Billy Elliot opening night in Toronto and Elton John is ushered into the Canon Theatre, eventually landing a mere seven seats away from me.

Sir John wrote the music for Billy Elliot (the Musical), and his partner, David Furnish, grew up in Scarborough. So it seems apt for them to be enjoying the Toronto debut together, along with the two menacing, beefy security guards who sit behind the couple throughout the show. The packed house even gives them a standing ovation. Twice. At the conclusion of the first act and at the show's finale. 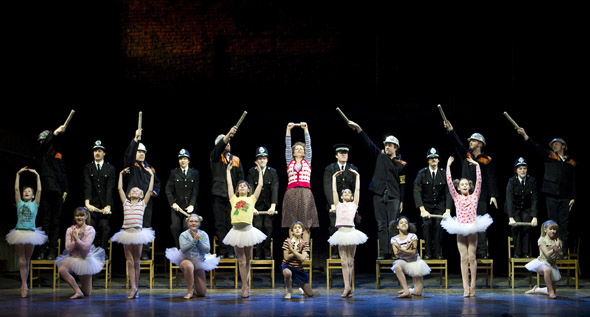 Billy Elliot tells the story of a coal miner's son who, after his father sends him to a boxing class, ends up in a ballet class and falls in love with dancing. It's set in mid-1980s England during the midst of a prolonged miner's strike.

Debuting in London's West End in 2005 and hitting Broadway in 2008, Billy Elliot won 10 Tony awards, including a best actor for Montreal teenager David Alvarez. Before the show, when I tell people I'm going to see Billy Elliot, I get weird looks. It's as if I told them I just joined the ballet.

This reaction is similar to the one offered by the coal miners to a boy who eschews boxing for ballet. But the narrative is about much more than a boy and a pair of ballet shoes. It's about a family sticking together. It's about the morale of a town. It's about three hours long, but it doesn't feel like it.

The song-and-dance numbers are full of energy, led by 14-year-old Cesar Corrales, who studied at National Ballet School of Canada. He demonstrates great poise and presence throughout the show.

Armand Schultz is also great as Billy Elliot's father. And Kate Hennig, who plays Billy's dance teacher, is particularly convincing â as is Cynthia Darlow as the gruff Grandma.

One of the only downsides to the show is that the live pit orchestra missed out on playing Tchaikovsky during the gorgeous Swan Lake dance number, but it's still worth a look even if you won't get to see Elton John take the stage in a tutu during the curtain call like last night.