The Overwhelming effect of live theatre

The Overwhelming is the type of story that is meant to be told through live theatre.

Exploring the complex topic of genocide in Rwanda, this show uses the stage to tell the stories of our recent history. Taking place in Kigali, Rwanda in early 1994, the story isn't an easy one, but an important one.

The Overwhelming is a Studio 180 Theatre production of a relatively new play by J. T. Rogers, which just opened Thursday night at the Berkeley Street Theatre. 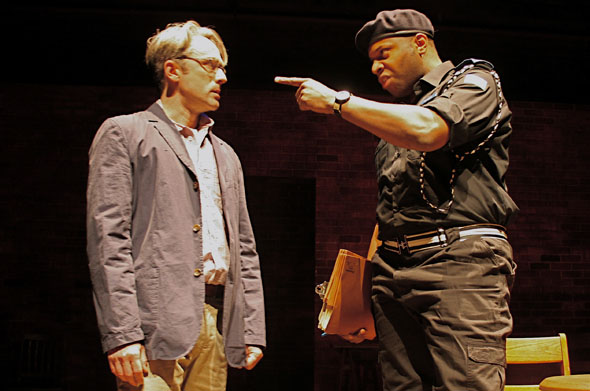 The play gets its name from the translation of lokeli in the Mongo language. The word was used to describe the killing of millions of Congolese resulting from decades of conquest and then subjugation that followed the campaign to conquer the Congo basin of Africa by Belgian King Leopold II.

There's a much more complicated history that is essential for context. Fortunately, a Timeline of Events is provided in the program that helps one understand the story leading up to the story that unfolds on stage.

The narrative is made up from interviews that the playwright J.T. Rogers and director Max Stafford-Clark did in Rwanda in February 2006, in preparation for the original production of The Overwhelming at London's National Theatre. The stories they obtained there from people from all walks of life allowed them to share, as Rogers writes, "of the genocide itself: why it happened, what they experienced and how they were living with what they had seen and done."

Some of these stories can be found in these quotes, but it's best to experience The Overwhelming live on stage to allow the magic of live theatre to take you there.

The story, directed by Joel Greenberg, follows a trio of American innocents abroad: An academic (played by David Storch) his young second wife (Mariah Inger) and his teenage son (Brendan McMurtry-Howlett) who attempt to bring their Western sense of morality to a country whose morals have long been blurred. By the play's end, I felt such anger towards Storch's character, Jack Exley. But perhaps that's the point.

I found the production lagged in only a few respects.

At times, when two characters spoke on stage at the same time, it came in loud bursts like machine-gun fire. When this happened, it was often hard to make out what either one was saying, as the volume of their voices were almost exactly matched.

The lighting design (by Kimberly Purtell) was for the most part quite effective, but got rather distracting in many instances, with bright lights from way above catching my eyes far too often.

This Canadian Stage Company presentation does the play justice. It's no wonder it was considered one of the 10 best plays of 2007 by Time Magazine, Time Out and New York Magazine. Perhaps it's got a chance to make a splash as one of Toronto's best in 2010.

Also worth checking out while you're at the show is the lobby photography display, The Men Who Killed Me by Samer Muscati, featuring testimonials from 17 survivors, written 15 years after the Rwandan genocide.

The Overwhelming plays through April 3 at the Berkeley Street Theatre (26 Berkeley St.). Tickets are $20-$45.