Oh What a Lovely War a delightful and touching satire

Oh What a Lovely War, given the Soulpepper Theatre treatment, is a delightful, touching production.

It's a bold anti-war musical by Joan Littlewood, Theatre Workshop and Charles Chilton, and directed by Albert Schultz. It's rife with catchy songs that satirize the military's role in what amounted to 10 million lives lost during World War I. The story is chiefly about Britain's role in the war, but there are enough subtle hints of Canada's involvement scattered throughout this show to make it particularly relevant to audiences here.

This production of Oh What a Lovely War opened on Thursday night at Young Centre for the Performing Arts in the Distillery District. It features an outstanding cast of actors and musicians -- almost always both simultaneously -- as in last autumn's awesome e.e. cummings in song from the CanWest Cabaret Festival, which really ought to get a reprise of its own. 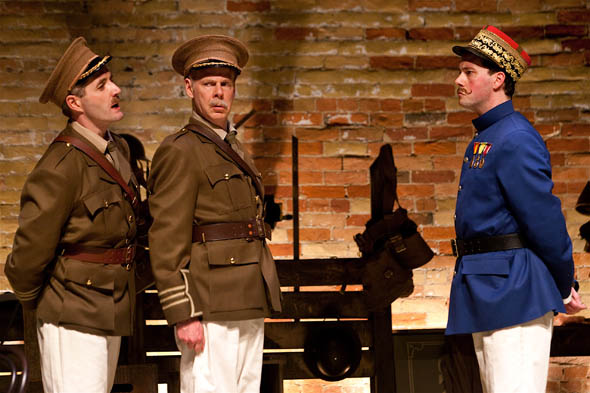 The show is two-and-a-half hours long, with a 20-minute intermission. But there's never a dull moment. There's always something amusing or entertaining or touching going on. Sometimes it's the musical ensemble on the side of the stage. Often it's the musical numbers on centre stage.

Featuring It's a Long Way to Tipperary, Keep the Home Fires Burning and Pack Up Your Troubles in Your Old Kit Bag, the songs and dance numbers carry the show, thanks to the deft musical director Marek Norman and choreographer Candace Jennings.

This play had an abundance of strong performances, particularly by Oliver Dennis, Mike Ross and Soulpepper Academy's Ins Choi.

And the costumes, designed by Lorenzo Savoini, were both amusing and effective: Oftentimes, a change of hat or prop altered a character's role within moments, allowing for the talented cast to quickly take on multiple roles with great effect.