Intimate Apparel, the remounted play by The Canadian Stage Company at the Bluma Appel Theatre, makes for a wonderful date.

Your girlfriend will love you for taking her out to a play that features such fabulous period costumes. And a wonderful script too. The play draws on themes of the search for love and happiness, and the risks people take in pursuit of that fulfillment.

You'll be transfixed by the love story of Ester, a 35-year-old African-American seamstress who makes sexy lingerie for the rich -- including socialites and prostitutes, 5th Avenue boudoirs, and bordellos. She's charmed by a long-distance letter-writing romance with a Caribbean islander working on the Panama Canal. 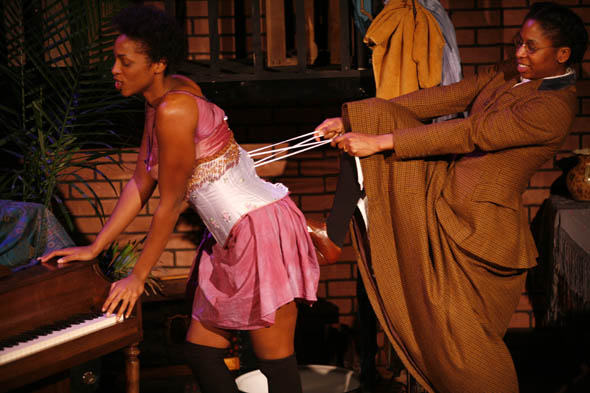 Dauda plays a compelling character caught up in her fantasies of marrying and eventually opening up her own beauty salon. Along the way, her frequent encounters with the fabric salesman Mr. Marks (played by Poch-Goldin) become more than a diversion to her mundane existence.

Ester's love-interest George (played by Hanchard) is a character that one starts to admire, but soon learns to abhor, as his character goes through a transformation as their relationship evolves. Then there's Mayme, the friendly hooker (played by Berry), Mrs. Van Buren, the well-to-do bored housewife (played by Street) and Mrs. Dickson, Ester's busybody landlady (played by Carvell).

There are strong performance by all six cast members, whose intricate relationships intertwine in this love story that will have your knickers in a twist.

Intimate Apparel plays at the Bluma Appel Theatre (27 Front St. E.) until March 6. Tickets are $20-$92 and are available online or by calling 416-368-3110. Monday night are Pay-What-You-Can performances (must be purchased in person at the box office starting at 10 a.m the day of performance). Special pre-performance discussions with Director Philip Akin are on Feb. 17, 24 and March 3 at 7:15 p.m.

If you're under 30 years old with valid ID, tickets are just $12.50 and may be purchased in advance or on day of performance, subject to availability.