What better night to kick off the Canadian premiere of The Toxic Avenger than on Halloween?

The eco-monster musical comedy, based on the 1984 Lloyd Kaufman classic cult film, plays at The Danforth Music Hall with a homegrown cast. I had a chance to attend one of the preview shows this week.

The Toxic Avenger storyline is pretty simple to follow: Geek Boy (Melvin Ferd the Third) gets taunted by high school thugs, who dump him into a vat of radioactive toxic waste, after which he emerges as an uber-strong mutant freak (Toxie), bent on winning the heart of the high school hottie and ridding the town of the eco-unfriendly New Jersey mayor. 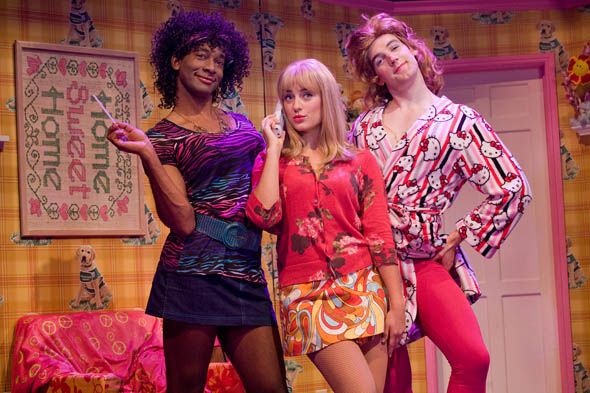 The stage production strays somewhat from the film, but the upbeat songs carry this musical through some funny situations. I like how Joe DiPietro (book and lyrics) and David Bryan (music and lyrics) give the film script a modern update. For instance, Sarah lost her sight "in a freak cellphone accident."

While the Toxic Avenger story is set in New Jersey, The Toronto production also gives a nod to some locales: "What's that smell? It must be Hamilton." There's also a cheeky reference to drinking from the polluted Don River.

The mostly Canadian cast keeps things upbeat mostly throughout, supported by a small onstage rock band, which drowned out the singing a bit at times. This is a bit of a shame, because there's some excellent vocal talent in this production.

Sarah, the blind librarian, played by Brittany Gray (fresh off the stage from We Will Rock You) has some of the most memorable songs, including My Big French Boyfriend and Hot Toxic Love.

The rest of the cast provides some strong performances. Especially Louise Pitre, who plays dual roles as Mayor Babs Belgoody (the evil mayor of Tromaville) and Ma Ferd (mother of Melvin Ferd the Third). And Daren A. Herbert is a riot as Professor Ken.

Playing Toxie is Evan Alexander Smith, a recent graduate of Toronto's George Brown Theatre School. He delivers some of the best lines, including "When your face is decayed... it's hard to get laid" in Big Green Freak.

Jamie McKnight and Daren A. Herbert provide much comic relief on stage, as they portray a total of 26 different roles between them. Their fierce and fabulous multiple looks mimic some of the film's campy characters.

The stage set-up is pretty neat, with rusted oil drums taking up a large part of the stage, which opens up to reveal Sarah's bedroom.

I found the preview performance a tad long, clocking in just under an hour and 45 minutes, with no intermission, but it's supposed to be just 75 minutes long. Altogether it's an amusing show with catchy songs and a modern theme, well worth the price of admission.