For about the cost of a movie these days you can experience an evening of Sam Shepard's wildest plays performed in the decrepit ballroom of an old literary society at St.George and Bloor.

Candles are for Burning Co-op present 4-H Club, Killer's Head and Cowboys #2, giving us a glimpse into Shepard's American west. In some cases, a very wild, wild west. All three plays are directed by Steve McCarthy (also a member of The Elastocitizens) who created, with Michelle Monteith and Christian Barry, 2006's much lauded Revisited.

The moment I enter the venue, I get a sense of what's to come. The plays are housed in a dilapidated mansion at 160 St. George Street (two buildings south of the Bata Shoe Museum at St. George and Bloor). It feels like an old barroom where one might encounter Tom Waits on the upright, slightly out-of-tune piano in the corner. 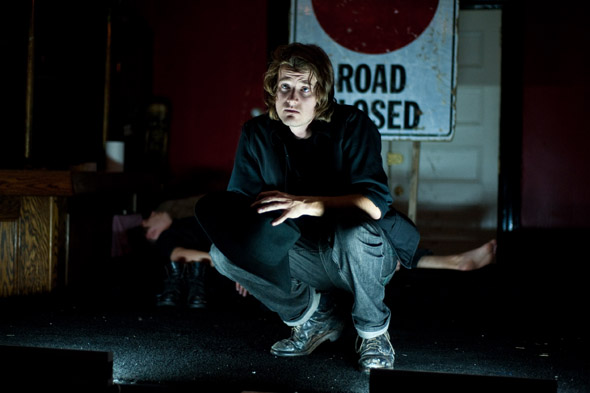 Starting off the evening is 4-H, a 1965 play about a trio of misfits, played by Joe Cobden, Chad Donella and Salvatore Antonio. Without much provocation, the characters go into hysterics in between sipping "you can't call it coffee anymore" while an old 14-inch black-and-white TV buzzes and flickers amidst garbage strewn across the stage.

The explosive scenario is full of witty asides, with tangents about projectile Washington red apples and stories of attacking mandrils.

It's also a very much an assault on the senses, with much shouting, banging of pots, smashing of mugs and smoking of cigarettes in the small, intimate room. By the time it's over I feel much relief and I'm glad to be able to step outside for some fresh air.

After intermission, the stage is changed around and I see a sparse, dimly lit set-up for 1975's Killers Head. We see a man (Rouzbeh Faird) blindfolded and strapped to an electric chair. We get to hear one man's rambling, final thoughts.

"Today's the day I get my pick-up truck," he fantasizes. Then his thoughts soon turn to nurturing a racehorse and go on for some time, making me wonder of the delusions that a man on death row might go through before he's zapped. Faird maintains his accent and character throughout, making for a chilling account.

It's almost comical to hear the young actors break into their southern twang, as they don't maintain consistency throughout. Reminds me of the time when I saw Alec Baldwin on Broadway attempting an authentic, southern accent as Stanley Kowalski in A Streetcar Named Desire, which incidentally co-starred Jessica Lang (Shepard's wife).

Still, it's amusing to experience them yabber on about the oncoming thunderstorm "just like the great flood of 1863!" and question if they spot The Big Dipper or The Little Dipper.

Their act is almost believable until the Redskins arrive and engage in a shootout, after which I'm not sure if they're just pretending to be cowboys all along. Somewhere in there is an eloquently delivered monologue about peacock feathers and birds of paradise, momentarily taking us outside of the wild, wild west. Altogether, it's quite a trip.