Nothing Is Enough in MacIvor's A Beautiful View

Dan MacIvor's A Beautiful View would've been more aptly titled Nothing Is Enough.

The mantra was repeated often enough throughout this two-person play, and with each repeated mention, one got a better sense of its meaning for the characters, played by Caroline Gillis and Tracy Wright.

They're two women whose lives weave in and out of an on-again, off-again relationship. We're drawn into their lives through vignettes that take us to a campsite, an outdoor outfitters store (somewhat like MEC) an airport bar and several parties.

I've really enjoyed MacIvor's plays in the past. Especially House, Here Lies Henry and Monster. The dialogue is always witty and sharp, especially when delivered by the playwright himself.

MacIvor (pictured right) being absent in this one left me with a longing to hear his voice, which I felt was diluted when told through the two female characters.

There are definitely some bona fide LOL moments as they chase after fleeting moments that embrace their sexuality, friendship and love.

The play's got a lot going for it: A sexually charged relationship, carefully illuminated stage lighting (by Kimberly Purtell), a ukelele band called Ukular (not Uklear), and a chronic liar who passes it off as "wishful thinking." 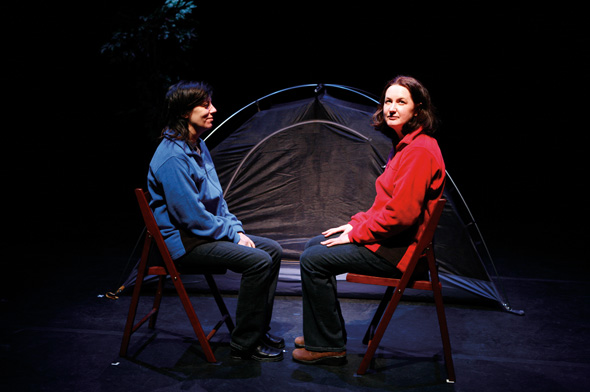 One of the surprise musical moments comes in the form of a telling song, "Four In My Ever," written by Tucker Finn.

The most memorable lines come when the characters turn to the audience, mid dialogue, and give their personal asides in the form of monologues. This is where we really get inside the head of the characters, finding out their true natures, fears and insecurities.

We get to follow the two as they fall in and out of relationships and marriages, learning along the way that "when the laughter goes away, it's over" and other truisms. By the end of the play, there's a whole bunch of dating moments that I'm sure most of us can relate to.

A Beautiful View has previously enjoyed a sold-out run at Buddies In Bad Times theatre (with the same cast). Catch this remount production at Tarragon Theatre's Extra Space (30 Bridgeman Ave.) until May 24. Tickets are $35-$45 (Friday night rush tickets at $15). 416-531-1827.