Being a 12-and-three-quarters-year-old girl must be tough.

Especially when your parents have divorced, you get to see your dad one night a week, your science fair project gets hijacked and you're made to be the flower girl at your dad's wedding to his new floozy girlfriend.

Kristen Thomson single-handedly depicts four characters that together tell the story of Claudia, a preteen trying to cope with all this and puberty in Crow's Theatre's remounted production of I, Claudia showing at The Distillery District's Young Centre for the Performing Arts.

Thomson accomplishes this by donning masks that help us understand each character switch. There are subtle costume changes too, which are mostly done in plain view, which keeps the momentum of the show going. Without seeing the actor's full facial expression, we rely heavily on the voice of Thomson's characters, which are aptly varied.

While the Claudia character is predominant, I longed to hear her dad's perspective. Instead, we get to hear from her grandfather, a figure rather removed from the goings on in her life.

Filling in the gaps, we get Claudia's dad's new girlfriend. And an amusing Bulgarian janitor who works at the senior elementary school where Claudia attends, hiding out in the boiler room with her stash of stolen items from her dad's apartment. 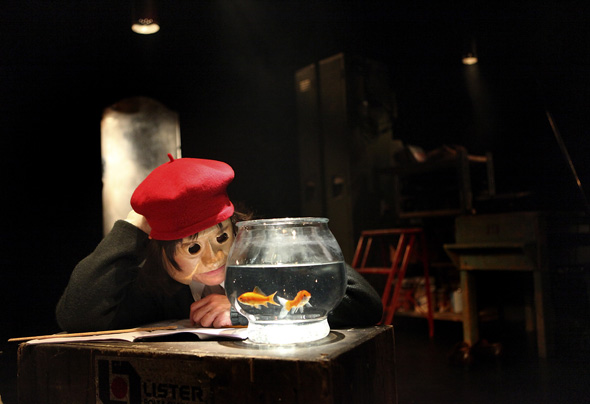 It's here where she finds herself pondering her lonely existence with her fishbowl friends, Romeo and Juliet, two fateful goldfish companions.

The play had an award-winning 2004 film adaptation, with Thomson performing all the characters. It went on to receive two Gemini Awards, an ACTRA award, two Canadian Comedy Awards.

The title is a play on I, Claudius, Robert Graves' 1934 novel about Roman emperor Claudius.

This show had three successful runs at Terragon Theatre that began eight years ago. But times have changed somewhat since 2001 for teens. You'd think the production would have kept up with cultural references such as ubiquitous cell phones, texting and Facebook. The show certainly still has relevance today, although a bit of an update would've been welcome.