During their fundraiser this week at the Supermarket, the innovative theatre company publicly announced they're expanding beyond the west end's Dufferin Grove with their latest project, Cyclops. Cyclops, or the Cycling Oriented Puppet Squad, is a bicycle-based theatre project made up of a mobile performance crew. The squad will pedal theatre and urban environmental issues to a community near you for the next three summers.

David Anderson, Clay and Paper's founder and artistic director, has been using bicycles and bicycle trailers to carry his brand of theatre to Torontonians for 35 years. "You can access more public spaces with bikes and [bike] trailers," he says.

Along with the stationary shows, the group also envisions an audience on their bikes following the squad to different locations in the final year of Cyclops. 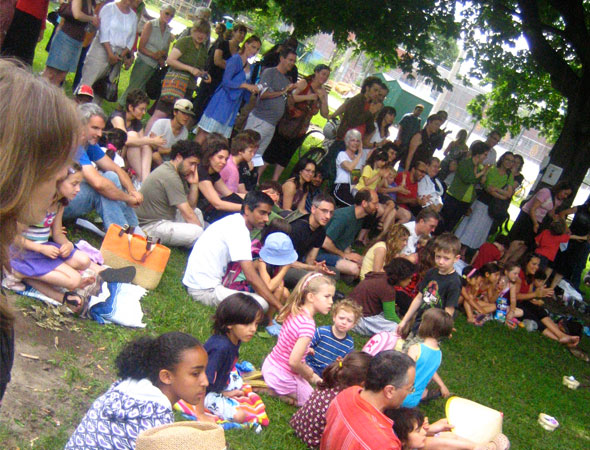 Engaging public space and creating new public venues for theatre are practices the 15 year-old community-based company believes are important. "As the city becomes more dense, public space is shrinking... then people won't get to meet each other in a democratic way or share an experience that can incorporate everyone, no matter how much money you have in your pocket, or your race or culture," says Anderson.

Cyclops' integration of bicycles and theatre doesn't stop at using bikes as a mode of transportation. Cat McLeod, the project's coordinator, says bicycles will also be a key element of the show itself.

I thought I had a pretty liberal understanding of theatre. Recently, at the Imagine exhibit in Montreal, I stood fascinated while watching Yoko Ono's 1965 video installation called Cut Piece, where audience members with oversized scissors cut clothing from a zen-like Ono on stage. I get the scissors, but bicycles?

The theatre company isn't exactly sure what it will look like yet. Anderson says they'll see what aesthetic twists evolve. Clay and Paper hosted auditions this week for the squad, who will develop and perform the bicycle-based theatre pieces. 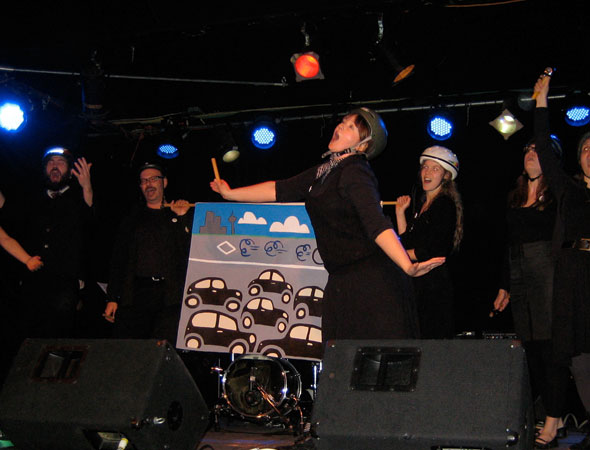 Clay and Paper did, however, give us a taste of bicycle culture's creative options at their fundraiser with a performance of Bicycle Revolution. Ten members walked among the audience to the stage, singing the glories of biking, with a refrain of "Two wheels are better than four. A bike will take your from door to door..."

Apparently, merging art and bicycles isn't strange after all. Google "theatre" and bicycles" and you'll get some interesting hits. It led me to the National Theatre in London's Bicycle Ballet from 2007.

So, dust off your bike and get it ready for summer. It will take you to some inventive political theatre, where its brethren will be featured performers.