Spring Awakening Is Gonna Bruise You

There's a moment you know... you're f**ked. For some, it came just before the intermission of Spring Awakening, a daring musical that opened last night in Toronto at The Canon Theatre.

A Spring awakening in Toronto happens when we come out of hibernation, shed all those extra layers of clothing and feel sexy and alive again. This year, it happens to coincide with the run of Spring Awakening, the musical. 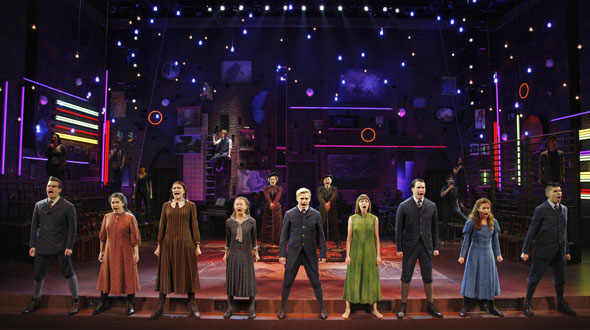 With book and lyrics by Steven Sater, there are some truly excellent songs. However, the lyrics to some songs may not be the easiest to swallow: Oh, I'm gonna be wounded. Oh, I'm gonna be your wound. Oh, I'm gonna bruise you. Oh, you're gonna be my bruise. Sounds a lot to me like some of the songs by Antony and the Johnsons.

The musical, based on an 1891 play by Frank Wedekind, is a coming-of-age tale set in a repressive late 19th century Germany. Debuting in the summer of 2006 at the Atlantic Theater Company and opening on Broadway later that year , it swept the 2007 Tony Awards, winning eight out of its eleven nominations, including Best Musical. 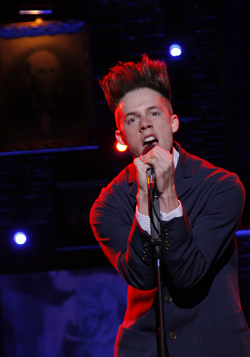 Spring Awakening is a musical mash-up of morality, sexuality and rock & roll. It was good to see the pit band on stage, where I could see them jam along to the great score, penned by Duncan Sheik.

As a rock musical, the use of microphones for the leads kind of made sense. But it often distracted me from the singing. Dressed in schoolboy uniforms (complete with knickerbockers) and blasting out songs into the mics, I couldn't help but be reminded of Angus Young of AC/DC prancing about the stage.

If the stage is miked, is it really necessary to have the characters whip out a cordless mic from their breast pocket and have to stash 'em away so often? Even the microphone stands seemed to get in the way of the movement on stage a few times.

Blake Bashoff (pictured right) pretty much stole the show as the character Moritz, who reminded me of the Strewwelpeter character from my childhood.

Bashoff showed a breadth of vocal range (especially in Don't Do Sadness) and his performance outshone most of the cast, including lead Melchior, played by Matt Doyle.

I wonder how different the balance of voices would have been had Saskatoon-born Kyle Riabko not left the role just days before this touring cast hit Toronto.

Other strong voices included that of the only other Canadian in the cast, Steffi D, who plays Ilse. You may remember her as a top-five finalist on Canadian Idol 2006.

The choreography by award-winning Bill T. Jones was up to scratch, with some fine dance sequences, especially towards the end of the show. Some of the longer scenes were too static and called out for more movement on stage.

Altogether, Spring Awakening is a refreshing piece of musical theatre for our time. Perhaps, like the characters in which it portrays, it's finally coming of age.

You can opt for a very limited number on-stage seating (just $25 for all performances) that put you on bleacher-like seats on either the far left or right of the stage and get to sit amongst the cast for part of the performance. On-stage seating is available by phone (416-872-1212 or 1-800-461-3333) and at the box office only.

Otherwise, tickets can be purchased online through TicketKing from $28-$99. Student rush tickets are $25 and are available two hours prior to each performance with valid student ID, cash only, in-person the Canon box office. Limit one ticket per person.

[DISCLOSURE: Mirvish Productions, the presenters of Spring Awakening, is an advertiser on this site.]