As part of the 30th annual Rhubarb Festival, Buddies in Bad Times Theatre presents an exciting new line-up of original contemporary works. Erika Hennebury is the Rhubarb Festival Director and Associate Producer, and has worked at Buddies since 2001. She maintains her commitment to bring rising new local talent to the stage. 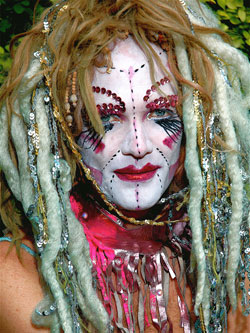 This special feature presentation launches the series of performances this year. The current cross country Canadian tour brings 'The Be(a)st of Taylor Mac' to Toronto for four nights only, February 5th to 8th. His 90-minute show is a whirlwind blast through the past, incorporating many elements reflecting on the past eight years of the Bush administration. Mac has been described as a flamboyant chameleon of words, music and sociopolitical tirades. He employs gender-bending surrealism to explore the human condition and challenge the contemporary culture of fear as a visual and vocal phenomenon.

Mac admits that with any show he begins with a topic, followed by the creation of a look to fit the topic, combines it with lots of imagery, which then culminates in an exploration of the topic from all angles. This current Canadian tour has brought him to Vancouver, Victoria, and Whitehorse of all places. "It's been quite an experience," Mac admits. "I'm really looking forward to Toronto as I have never been there." Being an American has provided Mac with a completely different view point on the States over the past several years. "I've certainly had lots of material to work with," he laughs.

Taylor's upcoming projects include the creation of a two-person show with Mandy Patinkin, co-created with Mr. Patinkin, Rachel Chavkin, and Paul Ford. This 30-member ensemble epic-extravaganza called The Lilly's Revenge, is being described as a collection insanely wonderful collaborations. "It's definitely the biggest undertaking I been involved with to date, and we are planning to launch this in New York City sometime in the Fall of 2009", Mac confirms. Until that time it's best to head out and catch up on some of his past antics in preparation for his next conquer of the world.

The Rhubarb Festival runs until February 22nd at Buddies In Bad Times Theatre, 12 Alexander Street. Performances begin at 8pm each evening with Taylor Mac's shows happening during week one at 9:45pm. Tickets are priced at $17 per evening, $35 for the week, or $60 for the full festival, and available in advance or at the box office - 416-975-8555.