Ah, the summer of 2008. If the rain doesn't wash you away, then you're liable to be swamped by theatre. Hot on the heels of the 11 day performance binge of the Toronto Fringe comes the Summerworks Theatre Festival. Think of it as a smaller, more refined version of the Fringe. Unlike its larger cousin, Summerworks is juried. The festival evaluates each show, and only the best applicants get in. So while it lacks the brash irreverance of the Fringe, Summerworks always provides a high-quality product.

And there's a lot of product to choose from. With 42 shows, eight nights of live music and a "performance gallery" at the Gladstone Hotel, the variety can be a little daunting. Continue reading for a few of my early picks. 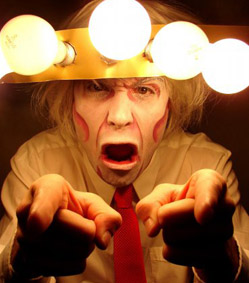 The Pastor Phelps Project: A Fundamentalist Cabaret. Taking square aim at homophobic bigot Pastor Fred Phelps and his Westboro Baptist Church, this one promises drama on and off the stage. Members of the church will be on hand opening night to protest the show. Be sure to let these idiots know what you think of them.

Pelee. From the folks who brought you last year's critically lauded Reesor, this show is a musical take on the weird history of Pelee Island. A safe bet for an interesting and original performance.

If We Were Birds. Based on the Ovid poem that inspired Titus Andronicus (you know, the one where people have their tongues and hands cut off, and get baked into pies), this play takes a frank look at the victimization of women in war. A solid cast takes on some tough material.

The Music Series. With acts like Mathew Barber, Gentleman Reg and the Sunparlour players, Summerworks has booked an impressive lineup of artists. Shows go nightly at the Theatre Centre, 1087 Queen St. West.

The Summerworks Theatre Festival opens tonight at venues across the city. For shows, showtimes and locations, visit the Summerworks website.

Top Photo: The cast of Pelee enjoy the sun.