Continue reading for reviews of 72 Hour Survival Guide, A Brief History of Petty Crime, Balls, Love Girl 2, Silver and Skinky, The Exploding Breakfast, The Honeymoon Period is Officially Over, We Is Blunderstruck!, and Wonderbar!

This is a very good play that could be great with a little editing. Set in a city gripped by a mysterious epidemic, it is an incisive exploration of the neuroses that crowd up urban relationships. The performances are strong, and the play features some clever stagecraft and innovative storytelling. It does run a bit long, and there are some unfortunate energy-sucking lags peppered throughout the production. This is a persistent problem with collective creation shows like 72 Hours, and it really needs a little outside direction to tighten up the story and focus the action for any post-Fringe incarnations. Still, well worth checking out.

A Brief History of Petty Crime
(reviewed by Roger Cullman)

Join Billy Hogg from Britain to hear all about his exploits with his best friend Chili as he retells life growing up with a poor father, who he blames for the troubles he gets into in A Brief History of Petty Crime.

Playing at the new Comedy Bar (945 Bloor St. W.), it's no surprise that the hour-long show has its share of laughs. Hogg's energy is engaging and he's able to draw in the audience more intimately with each aside. And there are many.

He goes on a tangent often enough to make each show unique. I'd pay to see it again just to find out what's being improvised and what's scripted.

His facial expressions help portray the many characters in his story well, never losing sight of the audience which he, metaphorically speaking, has in the palm of his hand from the get go.

Though the show's premise (two friends get testicular cancer at the same time) is unlikely (to put it mildly), this is a very funny and very poignant piece. The show features snappy performances by Rob Salerno and Adam Goldhamer, perfect as two adolescent males who find themselves having a brush with death. The humorous light-hearted manner of their non-stop off-colour banter serves to highlight the magnitude of the calamity they are forced to face. Well-written, well-executed, entertaining and emotional, Balls! earns a spot close to the top in my personal ranking of this year's Fringe productions.

Balls! is running at the Factory Theatre July 8, 10, 11, 12 . For more information see the Toronto Fringe website. 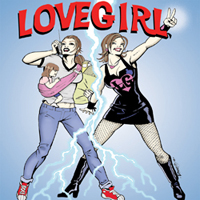 In a word? Schmaltzy.

For some reason I thought this was going to be a 'laugh-a-minute' kind of show, not an 'introspective, self-affirming, conquering self-doubt' kind of show. Don't get me wrong, there were lots of funny bits, it just wasn't what I expected.

Although, I enjoyed the entrance of other characters through voice-overs, I mean, who can resist Sean Connery as God, or Stewie Griffin as 'Count Fear'? And, I liked hearing how much she loved her daughter. Here's the thing: schmaltzy and funny? They can be a good combo. I did enjoy it, but I was expecting something different, so I wasn't in the right mindset.

So, check it out, judge for yourself - funny? Schmaltzy? Both? Neither? I'm pretty curious about how this one is playing to audiences, so if you've seen it, let me know what you thought in the comments section.

Silver and Stinky portrays the struggles of a veteran bicycle courier who decides to go back to school and to break out of his dangerous dead-end job in which timely package delivery is worth more than your life. Actors Kelly Fanson and Greg Dunham do quite a good job (though on a couple of occasions I wished Fanson wouldspeak up a bit). I could easily imagine either of them flying down Uni dodging cars (Dunham actually held a job as a bicycle courier at one point in real life).

The sincere and moving story certainly held my attention, though I am somewhat biased due to being deeply immersed in the urban cycling culture and having made a relatively brief but exciting foray into the field of bike couriering myself. So take my review with a grain of salt.

P.S. Note to performers: come on, guys, you know that courier bikes don't have kickstands! And in the rare cases when they do (which they don't), no courier would
actually bend over to flip them open by hand. The "machine gun mounted on the handlebars" idea is every courier's secret dream though! :-)

Silver and Stinky is running at the Tarragon Theatre Mainspace July 9, 10, 11, 12, 13 . For more information, see the Toronto Fringe website. 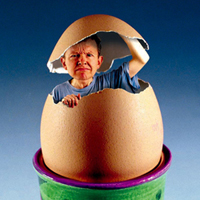 I loved this one-man show. It was a lovely subtle beginning. One moment the audience was chatting with Ingle Knight (the playwright and performer) and then suddenly I realized the performance has started. It's a quiet, soft transition, lulling you into the show without the traditional 'lights down, lights up' approach.

Knight's storytelling is engaging. He shows us his inner workings and offers up several characters from his days as a playwright in residence in Johannesburg. And, although the show is not specifically about Joburg, it does give us quite a flavour of it in the 90s.

If I had to classify the show I suppose I'd call it a comedy, but it's certainly more than just light-hearted fun. This is one of those shows that's funny and makes you think. Highly recommended, and luckily, there are several performances left!

The Exploding Breakfast is playing at the Factory Studio Theatre July 8, 9, 10, 11, 12. For more info see the Toronto Fringe website.

The Honeymoon Period is Officially Over
(reviewed by Tatiana Kachira)

I lost count of how many people, animals, and inanimate objects Gemma Wilcox portrays in this entertaining and energetic show about love and relationships (the press release claims it's 20). Some of those characters appear a bit too generic for my liking, and I could never quite forget that there is only one person on stage here (unlike in another Fringe show I reviewed, Freedom 85!, which creates a very realistic illusion of a dozen performers involved in the production, rather than just two).

However, I still would not hesitate to call Wilcox's performance outstanding and her sexy, daring, fast-paced, hilarious show with perfect comedic timing - superb. Without doubt, one of the highlights of this year's Fringe. Do check it out, and order your tickets early - I won't be surprised if all of the remaining performances
end up sold out.

The Honeymoon Period is Officially Over is running at the Glen Morris Theatre (4 Glen Morris St.) July 8, 9, 10, 11 . For more information, see the Toronto Fringe website.

We Is Blunderstruck!
(reviewed by Graeme Stewart)

A bumbling band hijacks the funeral of their biggest fan, and the result is a musical and interactive hour of clown-based comedy. We Is Blunderstruck! is a funny and charming show, and the high-octane performances make the production. The humour inherent in the premise pretty much runs its course three quarters of the way through, but an energetic finale saves it for the audience. The show could use some tightening up, but it's still an enjoyable hour of Fringey goodness.

We Is Blunderstruck! is playing at the Royal St. George July 8, 9, 10, 12. For more information see the Toronto Fringe website.

I'm not quite sure to make of this one. It's long by Fringe standards, and 90+ minutes is a tough slog without an intermission. Particularly if the entire show is one person standing and talking. Not much happens in this one-woman show aside from the monologue, and actress Celeste Sansregret struggles both with the text and her BMW-precise German accent. Still, just getting through a 90-minute monologue is an impressive performance feat. And the story Sansregret weaves is definitely interesting. It strains credulity in a few places, but finishes as a fairly well realized and insightful character sketch.

Main photo courtesy of The Honeymoon Period is Officially Over