Friday marks the first day of 12 hour a day Fringing, with the first show starting at 12:30pm and the last one starting at 11:15. One of the best descriptions of the Fringe I've ever heard is "the Russian Roulette of theatre." You might see the best thing you've ever seen, or you might see something that makes you want to scratch your eyes out. We're here to help you avoid the bullets so your eyes can stay intact.

Reviews after the jump of:
- Freedom 85!
- Ladylike
- The Zombie Dialogues 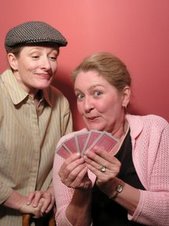 "Freedom 85!" runs in a basement. The props and settings are extremely modest, there are no fancy special effects, no elaborate stage lighting, and no stage, for that matter. Yet this might just be one of the best shows Fringe 2008 has to offer.

The play is about an 85-year-old who is trying to escape "the morgue" (as she "affectionately" calls her retirement home), and a younger woman, glad to take on the job of the old lady's "personal assistance". As it turns out, though, it is not clear which of the two needs the other's assistance more.

The acting by Andrea Risk and Debra Hale is nothing short of superb. Each actress plays about half a dozen of instantly recognizable characters seemingly effortlessly. The play has just the right mix of dramatic moments, tragic moments, bittersweet moments, and, of course, lots of comedic moments. My rating: two thumbs up + a standing ovation. 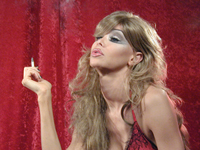 Sky Gilbert's (mostly) one-woman show staring Nina Arsenault, expects the audience to be baffled and outraged at the very concept of a transsexual. This kind of material would've shocked Toronto audiences in, say, 1965, but I think too many people have seen ' The Rocky Horror Picture Show' now to be put off by her.

'Ladylike' consists of an overly rehearsed monologue to the audience interrupted by vignettes of Nina with a male lover. I would have liked to have seen the production take advantage of Nina being the actress and see some references to her life. She could go into detail about her plastic surgery, her sex trade work, or her coming out story (topics she used to discuss in her infamous FAB column / television appearances) Instead the whole script is pinned around a tired mantra of 'follow your dreams', be whatever you want to be, etc.

Nina herself is an engaging, attractive performer; it's a shame the material doesn't measure up to her unique stage presence.

Ladylike is playing at the Fringe Club (Tranzac Club) every day during the festival at 6pm. For more info see the Toronto Fringe website. 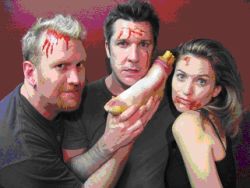 The Zombie Dialogues, Or: How I Learned to Stop Worrying and Love My Master

Zomedy (think Shaun of the Dead and Fido) is all the rage these days, and Busted Compass Productions makes its own contribution to the genre with The Zombie Dialogues. Their own dirtier, more musical and sillier contribution, that is.

Starting off as a simple tale of a scientist accidentally creating a zombie in his lab for nefarious government purposes, it ends up as a story of love, lust and the existential difficulties of being undead. Combining clever writing and imaginative staging with bawdy music and Tom Savini-esque gore, this show will appeal to both dedicated zombiephiles and those out for some genuine laughs. Good, silly fun.

The Zombie Dialogues is playing at Bread & Circus every night of the festival (except Tuesday) at 9:00pm. For more info see the Toronto Fringe website.