I was talking with my good friend yesterday, a veteran of many a Fringe performance. I asked him: with 150+ shows and 29 venue, is it possible to see everything?

Indeed. And try we might, with only two days to go.

Every girl in Toronto dreams of landing a Mirvish; don't deny it ladies. When you linger in the Oral Hygiene section of Honest Ed's, are you really interested in parsing the array of mint dental floss?...Or are you hoping one of the boys of Bathurst chances by, falls in love, and proposes to you right then and there with a makeshift shower curtain ring

Lupe has landed David Mirvish, and she's supposed to meet him on the loading dock of Honest Ed's. Will he show up? Will he break her heart? Will he whisk her into the store and make love on a fiberglass children's animal (one loonie at a time)?

Every inch of this production is crafted with pure creative invention. The plot is simple, memorable, and thematically elegant. It's about class; Lupe, the immigrant girl who works as a mattress stuffer, versus David, the first generation real estate mogul. A fringe show versus 'Lord of the Rings'.

Spending a warm summer night with Lupe behind Honest Ed's is an experience you'll probably never forget. And please, arrive early; this show is getting busier and busier.

A joyful little show that riffs on Virginia Woolf's famous question, "what if Shakespeare had a wonderfully talented sister?" It tells the story of three exceptional women- a scientist, a baseball player, and a astronaut-in-training- and explores the ways each had their ambitions thwarted by a sexist society. While 'feminist' in approach, this show never becomes dictatorial or uses sexual politics as a cudgel.

The three actors put in high-energy performances with some nicely understated character work. There's a lot of theatrical sophistication on display here, with a well-structured story and some nifty stagecraft. I end up saying this a lot about Fringe shows, but this one could easily be longer. The performers have chosen some fertile ground for exploration, and there's definitely room for growth.

Our character is just a young guy who is not that good with girls, and who is ashamed of having a dark side (though it never manifests in anything beyond thoughts). He is a nice guy. A disarmingly honest, unpretentious, charming guy. You'll like him. And you'll probably find his monologue about friendships, relationships, sexuality and guilt funny and poignant at the same time. He speaks truth about the human condition. An old gentleman sitting in front of me kept nodding his head as Bailey was talking. It was good.

(Safety warning: the play listing on the Fringe site fails to mention that there are some bright flashing lights in the show.)

Putz is playing at the Tarragon Extra Space July 12. For more info, check out the Fringe Toronto website. 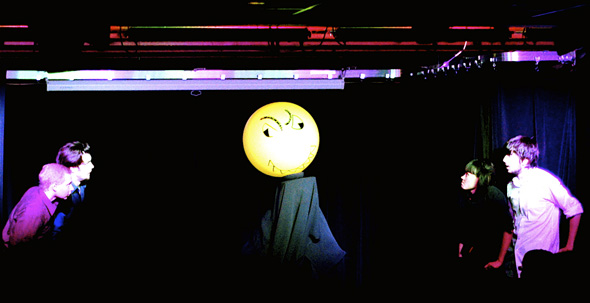 Blastback Babyzap is a collection of entertaining little skits, is somewhat lacking in cohesion that would bind them all thematically. Segues are well thought out, but some of the material doesn't seem to fit the feel of the rest of the show.

Highlights are sketches that played up the wordplay. A piece about a gameshow called Onomatopoeia is suberbly written and well performed. As is the Indoor Recess piece where the schoolyard tongue-twister challenge quickly became a surprise game-in-a-box.

There's one segment done all in rudimentary French, which would only fly at a festival like this in English-speaking Canada. The performance overall was fun and well worth the price of admission. The lovely Comedy Bar venue had a standing-room-only crowd Friday night, so get your tickets early for the remaining shows tonight and tomorrow.

Contrary to what I expected, this show does not really attempt to offer insights into the nature of time: though time is the show's unifying theme, I didn't really walk away with a new perspective on it. In fact, it seemed to me that in some episodes the writer tried too hard to emphasize that the show is about "time" and didn't bother to make the episodes relevant to the main subplots.

However, all in all I quite enjoy this play. Good acting and a creative, original script make for a dynamic and entertaining 50 minutes. And Tim Machin is such a personable fruit fly that I might feel a tinge of guilt now trying to squash the little short-lived (24-hour life span) fellows.

You Mean Now? is playing at the Robert Gill Theatre (214 College Street) July 12, 13. For more info, check out the Fringe Toronto website.