When I arrived I pushed my way through the throngs of high school kids that were leaving the matinee and got into the auditorium to be greeted by the cast of We Will Rock You on stage. I cozied myself down in a seat at the front and immediately started speculating what the apparently top-secret announcement might be. The woman from Canadian Press that I was talking to said that if it was just something to announce that We Will Rock you was going to be extended she was going to scream. I agreed, since, really, that's the kind of thing that a press release works just fine for.

Luckily there was more meat to this one. David Mirvish stood up in front of the audience and announced that Mirvish has entered into a deal with Key Brand Entertainment to purchase the Canon and Panasonic Theatres. It's an interesting turn of events since Mirvish were in long-term leases with these buildings, but it's hard to imagine that this move doesn't have something to do with the entry of DanCap in the arena of big theatre in Toronto.

Since the demise of Livent in '98 the big mega-musical type theatre in Toronto has been dominated by Mirvish Productions. In fact, this position of dominance wasn't challenged by any other company in Toronto, the only hint of competition were the occasional touring productions that made their way into the Hummingbird Centre (now the Sony Centre). But the times they are a changin'. In the fall of 2007 DanCap was suddenly on the scene with crowd-pleasing mega-musicals of their own.

Now, you might imagine that would be reason to celebrate, since there will now be even more big shows to draw tourists. The mainstream theatre scene (aka Mirvish) is one of the big tourism draws to Toronto. So, these two companies should be able to leverage off of each other bringing benefit to both of them and Toronto at the same time, right?

No. Apparently not. Apparently, instead, they will bicker like school children over everything they can. The only benefit of this is that it's a little bit amusing (if a tinsy bit embarrassing) to watch. 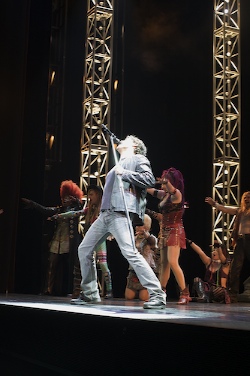 So, yesterday, at the end of the press conference the cast of We Will Rock You sang "We Are The Champions" to the gathered press. It's pretty hard to imagine that this wasn't meant to be a slug in the gut to DanCap. In fact, when talking to talking to the CP reporter after the conference she said that the song kind of felt like fighting words. I said "actually, it kind of feels like a great big "fuck you DanCap, take that!" We of course laughed at that, but honestly, it's hard to imagine it was meant as anything else.

But not to be outdone, on the same day as David Mirvish announced his plans to buy the two theatres, DanCap distributed a press release explaining that they are filing a lawsuit against Key Brand Entertainment and Ed Mirvish Enterprises, seeking an injunction to prevent the sale of the Canon and Panasonic Theatres. There seem to be some contradictory details on this, DanCap claims that Key Brand Entertainment is breaching contracts with them, and that they had an interest in the theatre and would have put in a bid of their own. The contradictory part of this is that as part of the press conference I attended, David Mirvish said that as part of the long-term lease they had on these buildings was the right of first refusal on purchasing. So, unless somehow Key Brand had put the same thing in leases with DanCap (which would be highly illegal I imagine) I don't understand how they could legally have allowed DanCap to bid.

There is no doubt that Mirvish bought these theatres now to avoid DanCap from making a play for them, since the theatres have changed ownership several times and Mirvish has never purchased them in the past. The only thing that has changed these days is the introduction of DanCap into the scene.

This one will be an interesting one to watch, that's for sure. Oh, and remember how the CP woman and I were saying how it had better not have just been something to announce a run extension? Well, although that wasn't all it was, there was also an announcement like that. We Will Rock you is being moved to the Panasonic Theatre with performances beginning July 16.

I can't wait to see what these crazy kids fight over next!