Andy Massingham's Dora Award-winning one-man slapstick play, Rough House, is a jewel-perfect example of theatrical minimalism. In the 50-minute show, he speaks not a word of text, and is accompanied onstage by only a sturdy kitchen chair, a small white bowl, and a dangling lightbulb. There's no story to speak of, and you won't care. Directed by Brian Quirt, Massingham channels the rough-and-tumble greats of silent film, Buster Keaton and Charlie Chaplin, and seasons their warmth with a dash of Becketty bleakness. The show wasn't designed for children, but its appeal is ageless; at Lorraine Kimsa Theatre for Young People, several hundred people, ranging in age from 4 to 94, alternately sat spellbound and laughed their faces off.

Massingham's not a small person- he's over six feet tall and solidly built- but he moves with a freaky combination of looseness and weight, like a bumbling cop in a ballet. Somehow reminiscent of a silent Lewis Carroll poem, he can collapse as slithily as a sheet unpegged from a clothesline, or as jabberwockily as a rack of bowling pins thrown down the stairs. It's uncanny to see a person that size with such a floaty, graceful physicality- you'd swear his joints are ball bearings and his feet are filled with helium. And when he soars into the air and collapses with an articulated somersault, punctuated by a series of comical thuds, you'll wonder how his head stays on his neck. 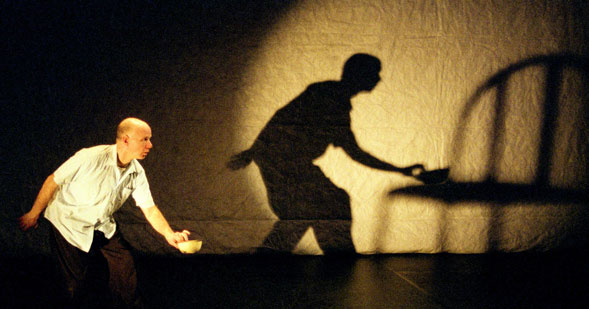 Rough House features a Dora Award-winning lighting plot so utterly inspired and madly detailed that it's clear the designers had as much time to play and rehearse as the performer. Jointly created by Rebecca Picherack and Michelle Ramsay, the lights themselves become characters, playing tricks on the hapless Massingham, and actually driving several sections of the show. One gorgeously surreal scene traps the shadow of Massingham's head in a box between his knees, so that his right hand must convince his left to help his head escape. In another, he drinks an incandecent lightbulb like a bowl of soup. It makes zero sense in words, I know, but onstage it's magic. Although the show feels loose and, in parts, improvised, it can only work if the cues are hair-trigger fast. And they sure are- Ramsay operates the lighting board like a dance partner, each cue timed with razor-sharp precision and humour. 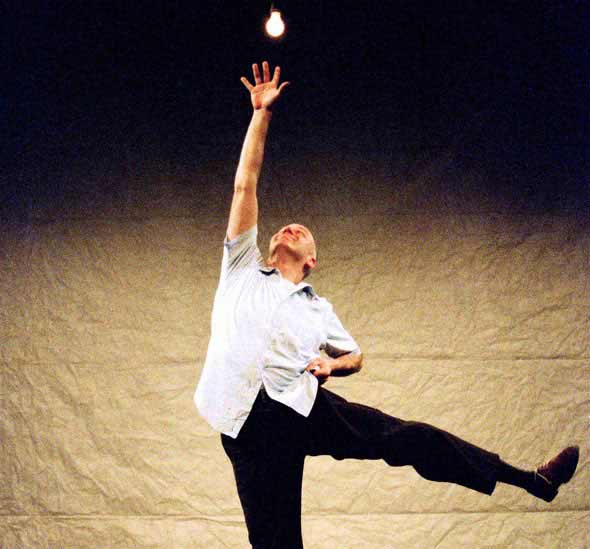 I met Massingham in my teens, when he taught Clown and Slapstick in the Youth Spring Training Workshop at the Tarragon Theatre. I've since studied performance with a list of teachers as long as my arm, but Massingham's class still stands out- his principles have profoundly informed the way I think onstage. For starters, the physical skills of tumbling and collapsing are straight-up hilarious. (Here's a tangent: Later that week, following my grade 12 measles vaccine, I pulled a Massingham pratfall and collapsed into a convulsing heap in the doorway of the school infirmiary. I opened my eyes mid-twitch to grin at the panicking school nurse, who rewarded my antics with three hours of detention.) Beyond the physicality, Massingham's workshop clearly communicated his deep respect for the principles of clowning and the art of creating a compelling stage presence, honouring the audience by always showing them "Something Fantastic". In Rough House, he's combined that trademark humour and presence with improbable athletics, and the results are fantastic indeed. There are just a few shows left before Nightswimming Theatre takes this show on the road to Whitehorse and Halifax, so get thee to the theatre, 'cause it's well worth checking out.