The National Ballet of Canada just wrapped up another season of The Nutcracker. It was the 12th year this production has been staged in Toronto and each year the National Ballet continues to follow the tradition of Nutcrackers all around the world by inviting celebrities, the media or other guests to assume walk on roles.

This year, along with Mats Sundin, Mayor David Miller, Olivia Chow and a host of others, I was invited to participate as a Cannon Doll. If you're thinking my name doesn't belong in this company, you're not alone. But apparently, local media is on the National Ballet's radar - editors, producers and hosts from Global TV, Citytv, Toronto.com, TVO, the National Post, CTV, CBC and CKLN also made the cut.

The invitation for myself and a guest to participate arrived via email from the National Ballet's Publicity Manager Catherine Chang a couple of months ago. I chose my fiance - and occasional blogTO Art Director/Designer - Bronwyn Anderson - to be my cohort. As I would later find out, the Cannon Dolls is always done in pairs. The day before us the audience got Margaret Atwood and Steven Page.

On the day of the performance, we were asked to arrive at the Stage Door thirty minutes before the 5:30 show time. There we were met by the National Ballet's Jennifer Cameron who led us to a rehearsal hall to meet with Senior Ballet Master Peter Ottman whose job was to show us what to do. In the corner of the hall, he flipped on a DVD of a previously taped performance and explained how and when we would appear on stage, rules we needed to abide by and tips for being a good Cannon Doll. 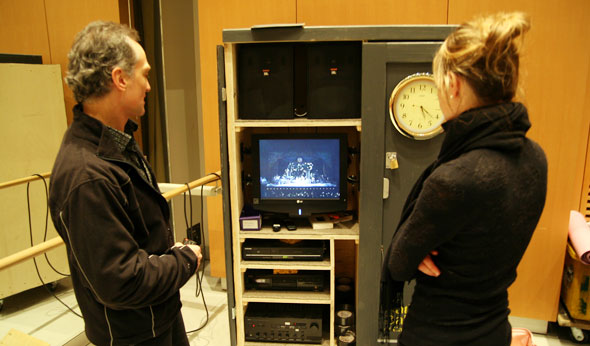 For those unfamiliar with the Nutcracker story, the Cannon Dolls, colourfully costumed as Russian Petrouchka dolls, appear about 30 minutes into the performance and shoot a cannon into the audience. Bronwyn and I wouldn't actually shoot the cannon though. We'd be joined by a paid professional who could be counted on for pulling the trigger and making sure we lined up at the right spots on stage.

Following a very brief backstage rehearsal which was more about understanding guidelines (stand left, go right) than learning any choreographed moves, we were led up a flight of stairs to a change room (below) where we got dressed in five-piece doll outfits (wig and hat included) and watched the start of the Nutcracker on TV. Both of us felt incredibly unprepared. 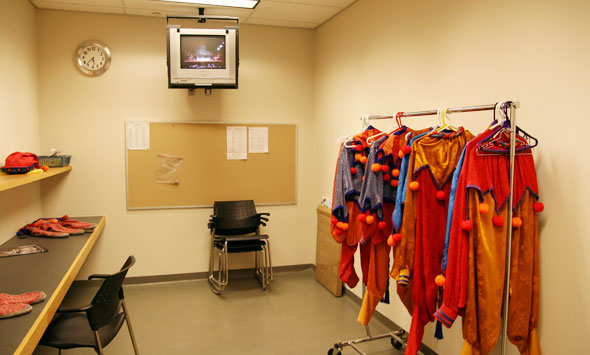 We were then met by our Cannon Doll trigger-puller comrade (Jonathan Renna) who assured us that everything would be ok. We were each assigned a role. Bronwyn would be a timid Cannon Doll and I would be a brave one.

We were also advised that our movements should be very expressive. After all, we were mimes - the ballet has no speaking parts. As the brave doll I should be macho and strong. To me, this meant something like flexing muscles, sticking my chest out or dropping to the stage and doing push ups. But for our National Ballet coach it seemed to imply animated arm movements ("if all else fails just act like a rabid Leafs fan"), and a mandatory sequence where Bronwyn would faint and I would need to run over and catch her before the floor did.

After a backstage tour and some photo-ops (no photos were allowed of the performance - union rules), we assumed our positions on stage left, ready to enter around the time that a bunch of mini-ballet students in mouse outfits were scampering about on stage. The last words of wisdom - watch out for the Christmas Tree! We would need to squeeze by its vibrating metal branches on the way to the centre of the stage. Weeks earlier Mats Sundin hadn't been careful and got whacked.

Our actual time on stage - while it seemed like an eternity - was a bit of a blur. I can report that I did catch Bronwyn before she hit the floor, and I did wave my arms around an awful lot. What I remember most clearly is that when we were done, off-stage and de-costumed it was time for the intermission, and a cold bottle of Mill Street never tasted so good. 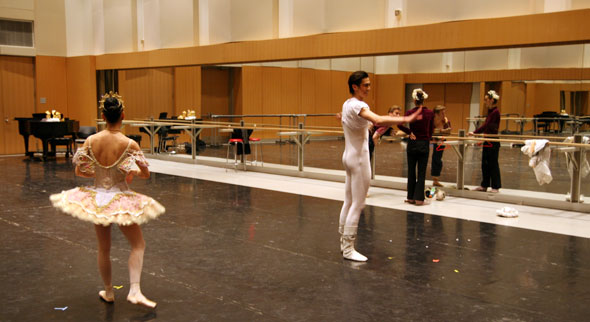