Tonight is the much anticipated opening night for The Fort at York, a new site-specific theatre project at the historic Fort York.

The play is set on the eve of the Battle of York, April 27, 1813, during the War of 1812. Fourteen American ships sit in the harbor waiting for daybreak with an army vastly outnumbering the 700 British and York soldiers gathered at the fort.

The production is definitely unique, the audience is split-up into four groups and lead by a guide (my group's guide is pictured above) through the 200 year-old-buildings of the fort. In the first-half, the groups rotate through four simultaneous scenes at various places in the fort. In these scenes the audience is introduced to a variety of fictional characters and stories depicting what could have happened to the night before battle. As the groups travel between the four scenes, they together witness the continually running plot at the main cross-roads of the fort. In that way, the four groups are presented with the same four scenes but in different order and together witness recurring characters en route.

The second-half takes place in the barracks where all 15 characters finally interact, weaving the stories together in a dramatic climax. 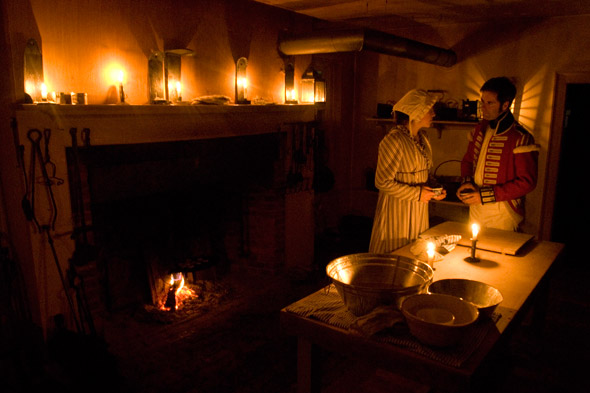 The strength of the play is it's intimacy and location. Each of the four first-half scenes is lit by candle or fire-pit alone. The interaction with the fort is breathtaking, in one scene the audience stands in the kitchen of the officers' quarters and watches as Maggie (Erin Brandenburg), a soldier's wife, washes and cooks with tools we only learned about on our grade school field trips (pictured below middle). The final scene in the barracks places the audience amongst the soldiers in their bunks the night before battle. At moments we are left with nothing but the breathing and rustling of sheets as the characters toss and turn in their bunks.

Fort York is haunting at night.

As with most site-specific theatre, the proximity to the characters can be unnerving. Actors are inches away from the audience, characters will need to push past us to hang something up or continue their ordered march. In my experience, this uncomfortable closeness wore off as they play progressed and by the end of the of the first-half I let myself be the voyeuristic fly on the wall. This allowed me to fully enjoy the final scene in the barracks where I almost felt like one of the soldiers myself.

I would encourage audience members to arrive early to read about the battle in the Fort York museum (it's along the back wall on the East of the building), the gathering point before the play begins. I suggest this because their was a disappointing lack of emphasis on the battle itself. For my taste, too many characters were battling with personal battles and grappling with insanity or childhood memories. I would have loved a simpler play about the significance of the evening alone. Wasn't their impending battle a battle enough?

The performances are outstanding and the ensemble cast works a challenging second-half remarkably well. Simultaneous discussions and action in the barracks gives the audience on one side of the room and entirely different perspective and insight than audience on the other side. Throughout the scene, each actor stays true to carefully crafted characters, reacting to the unfolding tension subtlety and effectively. It's just as enjoyable to watch characters not directly involved with the scene as it is the major players. Especially strong performances by Michael Wheeler as Bernard, James Cade, Scott Clarkson and Erin Brandenburg as Maggie.

The play was written collaboratively by the 15 actors and Dora Award-winning playwright Tara Beagan.

The Fort at York is Crate Productions third production. Crate's previous two shows were also site-specific. The 2004 Dora Award-nominated Tape was performed in a hotel room at Toronto's oldest continually operating hotel, the Gladstone. In 2005, Crate's second show, Blackbird, was presented in an abandoned apartment at Yonge and Gerrard.

But while these first two productions found the play first and then looked for an appropriate site, The Fort at York was built around the location. In fact, for the past two-years the entire creation process, from brain storming to rehearsals, happened on site at Toronto's Historic Fort York. Crate Productions co-founder Chris Reynolds describes how it worked: "If it was going to be site-specific, then we wanted to make sure it wasn't just a play that could have been performed on a stage. And so we created everything on site. All the scenes were developed, workshopped and rehearsed in the very rooms of the fort we'll be performing them in."

Dress warm, the night is necessary for the intimacy of the play, but large chunks of time are spent outside, including one 15 minutes scene by a fire-pit. On the dress rehearsal I attended, two audience members brought a blanket, not a bad idea.

DATES: Thursday, September 20 - Saturday, October 13, 2007
TIMES: 8pm sharp
TICKET PRICES: Tuesday - Thursday $25, Friday - Sunday $35, half of Sunday's tickets are PWYC (Pay What You Can) and available at the door on a first-come-first-served basis.
LOCATION: Fort York National Historic Site, 100 Garrison Road?BOX OFFICE: 1-888-222-6608 GROUP SALES: 416-466-5979
WEB PAGE: www.crateproductions.com
Artist Talkback Sessions: Meet the creators of The Fort at York. A Q&A Session will be held after the show on Tuesdays and Wednesdays.

On-site box office at Fort York opens one hour before show time, any unsold tickets for that day's show will be available for cash purchase. When a show is sold out, rush tickets may become available at show time.

Above (from left to right): Our guide at the fire-pit (producer Chris Reynolds), Maggie (Erin Brandenburg) cooking in the officers' kitchen, and a scene at the crossroads between scenes.