A Century of the Royal Alex

Today, amid show tunes and speeches, lots of laughter and a few tears, the Royal Alexandra Theatre turned 100. The area of King Street in front of the theatre was shut down and a parade of performers, dignitaries, and Torontonians from all walks of life celebrated the 100th anniversary of the oldest continuously operating legitimate theatre in North America.

Messages from Stephen Harper, Dalton McGuinty, David Miller, Michaelle Jean and Queen Elizabeth II herself were read to the crowd of people gathered outside the building. Julian Mulock, grandson of Cawthra Mulock, the man who built the Royal Alex in 1907, was also on hand for the festivities.

A time capsule was buried in one of the theatre's walls, containing newspapers, photos, a piece of the theatre's original floorboards, and other items. A plaque was unveiled to commemorate the event and the city proclaimed August 26, 2007, as Royal Alexandra Theatre Day. An open house was held, allowing fans to walk through all sections of the theatre, including backstage areas and spots that had been closed for years. 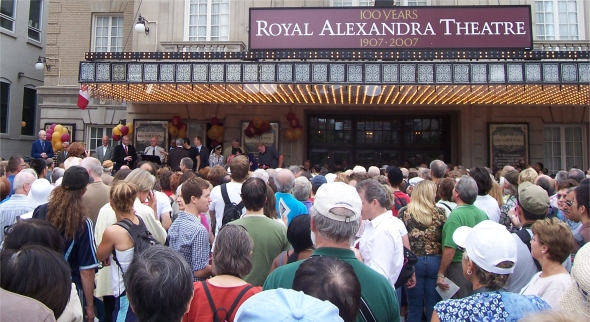 On everyone's mind was the late Ed Mirvish, who purchased the theatre in 1963 and saved it from demolition.

"Nobody would be celebrating today if not for the passion of 'Honest' Ed Mirvish" said Colin Carrie, reading the words of Prime Minister Stephen Harper.

Shirley Douglas shared her memories of life backstage at theatres like the Royal Alex, ending her speech with a thank you to Ed Mirvish and his wife Anne.

"I can never thank Anne Mirvish enough for saying to her husband 'There's this great big theatre for sale down on King Street and I want you to get it!"' Cheers, laughter, and applause followed.

Anne Mirvish herself was on hand, wearing a 1907 period dress that she originally wore to the theatre's 60th anniversary in 1967. She waved to the crowd and spoke of how much the theatre meant to her and her family. At one point she asked for a moment of silence to think about the man she lovingly referred to as "Eddie."

"He would have loved today," she said. "I feel that he is here in spirit."

"I know my father would have loved to have been here," he said. "He didn't get to see this day, but he saw many great days and I know he's looking down on me now."

"Why can't we have a stamp with Ed Mirvish and his top hat?" he asked to the cheering crowd. "This whole damn city should be called Mirvishtown!"

Comedian Dave Broadfoot called the theatre "the home of standing ovations" and referenced the early days of the theatre, when it was opposite railway tracks and there wasn't a restaurant in sight.

"King Street West looked like Saskatchewan east," he claimed to cheers and laughter. Broadfoot credited the Mirvish family for developing the area.

"I think that's what makes the Mirvishes such exemplary people. They care about where they live," he said. "And if they didn't, we wouldn't be here and this 100-year-old theatre wouldn't be here."