George Balanchine's famous words way back in 1965 as his vision of Don Quixote first hit the stage were, "...everything a man does he does for his ideal woman. You live only one life and you believe in something and I believe in a little thing like that." For the uninitiated, this sums up the classic tale, and Balanchine's Don Quixote, quite well.

The story of the the Man of La Mancha has been told and re-told, and constantly re-interpreted in ballet and theatre performances over the past 400 years since it was originally written by Cervantes. Prolific and innovative choreographer, George Balanchine, took on the task of creating a ballet performance of Quixote more than 40 years ago, which ran in New York from 1965-1978.

Balanchine, who passed away in 1983, entrusted his original Dulcinea, Suzanne Farrell, with the Quixotic performance in his will. Farrell has picked up torch and staged a masterful show with the National Ballet of Canada, which is now playing at the Four Seasons for the Performing Arts throughout the week.

This being my first ballet experience, I can't say I knew quite what to expect beyond the obligatory pointe shoes and ballerinas. I'm glad it was though, since I was delighted with what played out at the Four Seasons Centre that night.

While the choreography in this performance was simply amazing (more on that later), what stole the show in my eyes were the narrative elements that meticulously crafted a classic story. Very seldom did either the narrative or choreography seem forced, a problem that many performances featuring both musical and dance seem to encounter. In fact, they complemented each other very well and enhanced the overall flow of the show. 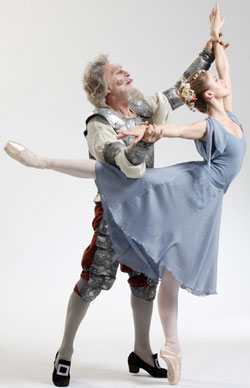 The prologue sets the scene and introduces our protagonist, Alonso Quixano the Good performed by Hazaros Surmeyan for the evening's performance. An old man with a few cards short of a deck, Quixano begins to visualize a world of chivalry, adventure, and romance. He turns the pages in the wonderfully decorated and over-exaggerated books of chivalry that made up the set of the study, and creates his fantasy character, Don Quixote de la Mancha.

Dulcinea, Quixano's servant girl-turned queen and lady by Quixote, played by Heather Ogden for the night, was absolutely stunning. Her solo and group dances captivated the crowd with her grace, and brought about thunderous applause and cheers of "Bravo!" throughout the production.

The costume and set design were impressive, especially those seen the first through the second acts. In the second act, set in the palace, dimly lit chandeliers hang above a glamorous ballroom, as dancers in elaborate and almost gothic black and gold gowns gracefully dance around (and mockingly, with) an out of place and confused Quixote. The real dark feeling of the ballet came across strongly in the many characters and their costumes that Quixote characterized as evil, threatening his Dulcinea or the good of the world.

All in all, the show was amazing, and opened my eyes to the world of ballet. Suzanne Farrell's revitalization of Balanchine's work was touching and beautiful, as was the dance performed, particularly by leading lady, Heather Ogden. If you haven't yet experienced any ballet, or the Four Seasons Centre, this is a great opportunity to see both for yourself.

Balanchine's Don Quixote plays nightly at 7:30 this week from June 20th to the 23rd (Wednesday to Saturday). Matinees at 2pm on the 21st and 24th (Thursday and Sunday) at the Four Seasons Centre for the Performing Arts (145 Queen Street West). Tickets available through the National Ballet of Canada.