One review for Floorplay, the new show playing at the Hummingbird Centre this weekend, claims that the show is "so hot it probably contributes to global warming." Now I'm usually one to dismiss such cringe-worthy sound bites, but after attending the opening night of Floorplay yesterday, it's no lie that everyone in the audience was ready to heat up the dance floor. 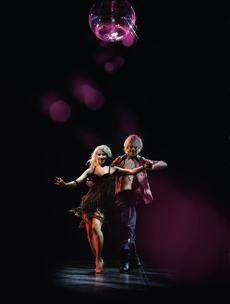 Floorplay is the most recent production from Burn the Floor, a ballroom dancing phenomenon that has played for over 3 million people in over 32 different countries. Playing at the Hummingbird Centre for three days as part of its world tour, Floorplay aims to bring the sensuality of dance â the name of the show itself is a play on the word 'foreplay' â to the audience through live music and energetic choreographed numbers.

Apart from the physical sensuousness the show exudes, what really impressed me is the technical prowess of the dancers. Every step was meticulously planned and executed, and the physical chemistry they all had on stage was intense. The fantastic percussionists added to the ambiance, and the dancing in the aisles made it feel somewhat as if this was a private and impromptu (yet well-rehearsed) show rather than a glossy global production. While the auditorium was large, every member of the audience seemed to be engaged with and engrossed in the spectacle.

The lighting was largely unimpressive and the set decor was uninspiring for the most part, but neither of them detracted from the main draw of the performance: the dancing. Infusing Latin flavor with contemporary music, the choreography combined groovy gyrations with fancy footwork that steamed up the stage (with the help of some smoke machines) and brought everyone to a sweat. It may be hot in Toronto right now, but the city mugginess didn't compare to the sizzling sultriness coming from the stage. And yes, that may be cringe-worthy reviewer copy I just wrote right there, but it's true... Floorplay is one hot show.

Not convinced yet? Here's a short clip of what you can expect at the show:

You don't have to be a ballroom dancing fanatic to know that the level of skill displayed in this show is awe-inspiring and that the infusion of song and dance is infectious. There are only three more Toronto shows left, so I'd suggest hopping over to Ticketmaster right now to make sure you don't miss Floorplay.