The cast of the new Second City Revue, Tip of The Melting Iceberg, know how to mix commentary with comedy. Like the old Saturday Night Live shows of days long gone by, this latest production is far from 'basic ha ha' sketch comedy.

"The show has several strong themes woven throughout it, which are indicated by our title - The Tip of the Melting Iceberg", says Leslie Seiler, the newest member of the main stage cast. "Besides the obvious theme of global warming and perhaps global chaos, the theme of only seeing the tip of 'anything' is quite prevalent. Many of the scenes deal with characters revealing 'more than meets the eye'".

The company, based originally out of Chicago and Toronto, started out in the late fifties and came to major prominence by inspiring and filling the casts of Saturday Night Live and SCTV as well as bolstering the careers of Jim Belushi, John Candy, Catherine O' Hara, Bill Murray, Eugene Levy, Mike Myers and many, many others.

The company always prides itself on tongue and cheek humour that pushes the boundaries and takes risks, always maintaining a cynical and hilarious reflection of life and creating memorable characters and storylines.

Second City has spawned many improvisation and sketch comedy troupes that can be found on every corner of the city and, through their conservatory program, training in this style of comedy can be broken down to the most minute detail.

One thing that people fail to mention about improvisation (which most of the performed sketches come out of) is how difficult it really is. Just spend a short time seeing some of the many failed attempts at the craft and you can see how one can become quite sceptical of the art form.

In the history of acting there are two techniques that are the most difficult to master as an actor. The first is that of classical theatre acting, born out of the Elizabethan era and including Shakespeare and Marlowe, and at the other end of the spectrum is improvisation, which was born out of the Italian Commedia dell'arte. Trained well in both makes one hell of an actor as it gives the basics of performing as well as the technical subtleties needed to perform. Improvisation, in particular teaches the most important stage rules needed to be a great actor. Some examples include: learning that the scene is the most important, not you, listen to your acting partners, and dealing with unforeseen actions or occurences on stage.

There have been many attempts to create successful Improv and sketch works. Not all groups are able to produce the high quality of work necessary to create a successful sketch show. Second City, however, has achieved this. Their newest production is no exception. Tip of the Melting Iceberg is a 'fall out of your seat' kind of funny that you probably haven't seen in a long time. 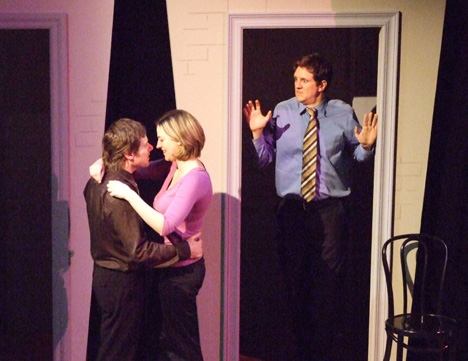 The new theatre, located directly behind Wayne Gretzky's is a far more suitable environment than their last venue. Tucked in behind the Great One's pub brings back memories of the Old Fire Hall Theatre. With its 'off the beaten path' underground feel, one gets the sense of coming to somewhere edgy, bold and fresh.

This Friday night was a packed house and the show was a huge success. The sketches are fast paced, with the performers playing at top notch energy levels, rarely slowing down to let the audience take a breath. Yet through all the hilarity one can't help but feel the relevance of the subject matter, making the show infinitely more interesting and again showing why Second City reigns supreme in their genre.

This is the intention, says Seiler. "I think the show is trying to say that looking beneath what we first see is how we can learn, grow and even solve problems. The sketches don't always find a solution but they bring issues into our society, racial politics, gender politics, family dynamic, body image to the surface and at least beg the question - what else lies beneath and how much further should we look before we can find new ways of thinking/living?"

What is also prevalent is how much fun the cast is having. It seems that there are even times when they surprise each other, and it is to our major delight that once in a while one of them even starts to break up a bit on stage at one of the bits the others are doing.

"I love the closing number. It's fun to perform and sing. I like all the musical numbers I'm in actually - particularly a duet with Lauren Ash where we play sort of dueling coffee shop singers who can't help but rub each other the wrong way. It's probably my favorite part of the show and deals with the ridiculousness of how important body image and being perfect (particularly for women) has gotten."

So in the end the troupe has found their chemistry, timing, pacing and theme. The casts' talents complement one another wonderfully and it is a pleasure for anyone to sit back and enjoy theatre in that kind of environment. Friday night is particularly a treat as the gang, seemingly immune to exhaustion, follows their show with an Improv set. And that's just the tip... well... go see it!

Tip of the Melting Iceberg - Runs at The Second City . Indefinite run.