When I heard Studio 54's version of "If You Could Read My Mind, Love" I wandered out into my livingroom breaking away from my ritual make-up regime to see the most bizarre and creative puppets dancing and singing for Kevin and Dina on Breakfast Television.

After watching in awe, as soon as the info was given I wrote it down as quickly as possible and then jumped on the internet to link to the Diesel Playhouse where I quickly found everything I needed to know about Cabaret U-Mano. 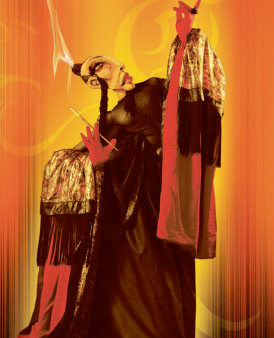 With my favorite theatre partner in tow, we entered the theatre and took our seats. We watched as the theatre filled up quite quickly (obviously we weren't the only ones that had heard about the musical revue). While we sipped on our drinks, we had the pleasure of getting up close and personal with one of the fabulous puppets. I was amazed at how much effort had gone into each and every puppet--with special attention paid their hairstyles and even the littlest details like sparkly bling, long lashes and the perfect shade of rouge.

Once the lights dimmed and the music started, I don't think there was one moment where we were less than delightfully stimulated. Knowing that this was a cabaret, let's just say that there was a little bit of puppet skin being shown. This is definitely not a play for the kiddies, but for the adults, it was some fantastic naughty entertainment.

At first I thought I'd be a little thrown that the puppet masters were not dressed entirely in black. Their heads and hands were never covered...unless it was for a song that required some puppet-like gloves or a mask. I had thought that this would take away from the 3.5 to 4 feet tall puppets, but I was pleased to realize that they had thought enough to interact with them when necessary and then fade into the background when the puppet needed to take centre stage. Having 2-4 people maneuvering the pint sized cuties, it was fun to see these little diva's hips shake, booties bounce and legs lure the audience in.

With much of the music leaning towards pop, jazz and blues there were many songs that I found myself singing along with and if you can believe it, full-out chair dancing! My friend and I could barely contain our enthusiasm. Ahhh, who am I kidding...I don't think we contained ourselves much at all--I just wish we were sitting in the front row so we could have had a chance to interact on stage with the puppets as some poor guy did on the night we saw the show. Shy at first, you could see he was truly embarrassed to be on stage but by the time the various puppets had flirted with, writhed around and done more than a REAL cabaret dancer would to him, you could tell the young guy was enjoying himself. I mean, how could you not? Hello? Conrad The Transvestite? Lorraine The Diva? And Kiko The Latin Lover? I'm sorry but this was no Sesame Street and for that, I am thankful.

Cabaret U-Mano is playing until February 18th with evening shows from Tuesday to Saturday at 8pm and then matinees on Saturday at 5pm and Sunday's at 2pm--and with flamboyantly fun characters like these, this is something that you're not going to see everyday. Afterall, how often is it that you get to see a life-sized obese female puppet singing and dancing in S&M gear???!! That, is just a treat in itself.