In Focus: Harper's Bazaar ; Comedy for the Serious

Last Monday a cabaret was performed as a Pro Conservative rally in lieu of the impending proposal for a 1.1 billion budget cut to various cultural and heritage facilities in Canada. Museums, galleries, adult literacy programs, and youth employment programs are just a few of the services that would suffer as a result.

The cabaret, of course, was staged. Harper's Bazaar, performed last week at the Clinton's Tavern back room brought together some of the city's best comics to joke about a very serious topic.

And who knows better what living in a state of little funding can do to the livelihood of those affected by budget cuts than the artist? Artists also tend to seek social justice in their work and try to create a dialogue between artist and community in the hopes of helping to relieve stress and anxiety as well as to inform.

One of the budget cuts that directly effects this view of the arts is the Foreign Affairs Public Diplomacy program. 11.9 million dollars will be cut to this organization that dedicates itself to the promotion of Canadian studies and culture abroad.

Fighting back does work and cries can be heard. Most recently the Canada Council for the Arts was awarded $50 million dollars in funding, The National Arts Centre $57 million and here in Toronto, The Arts Coalition, a collection of artists from all over Ontario, was brought in to discuss the concept of increased funding with MP.s at the Hill. 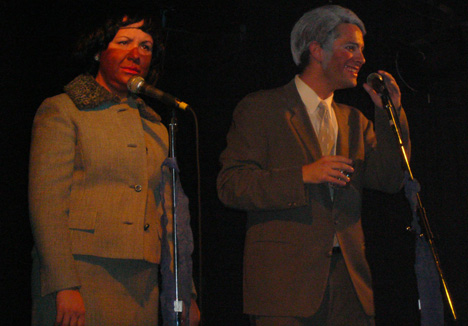 A visit from Condoleezza Rice and Stephen Harper himself culminated the evenings festivities.

Bruce Hunter, one of the performers of the night, discussed the general plight of the artist, the reason for the constant brain drain to the south, and his reasons for wanting to be part of the evening. "I found that it was a great night but I wish I didn't have to perform at shows where the collective objective was to try and get some respect from our representatives in the government. It seems so hopeless sometimes when the elected officials in this country have such a demented idea as to what Canadian culture is. They think it is a series of heritage moments and that's it. Not this full multi cultured landscape that includes modern plays, political plays, dance, music, visual mediums as well as written works and stories that mean something other than stuff that includes horses and carriages."

I spoke with other performers that night including organizers Adam Paolozza and Melissa D'Agostino who hosted the show as Harper lovers Doug and Debbie.

What was your initial intention for the show?

"What we wanted to do with Harper's Bazaar was to get artists and the community together in an entertaining atmosphere to raise awareness", Adam said, "and open up a dialogue about what this government's plans are for the future of arts and culture in the country."

Do you think that the evening was a success?

"We really feel that we succeeded in this. We were overwhelmed by the diversity of the crowd. There was a general feeling that people thought the evening was important and worth their support, including other artists that I've run into since the show who couldn't make it. They were really concerned about how it went and sorry that they missed it. It makes us realize that there is an audience out there for this type of political theatre, and more than that, a need for such art.

It was also great to channel our energy and anger over these budget cuts into something positive and entertaining. You want people to feel as passionate as you do without being too pedantic or preachy and I think we did that. It's difficult to make people laugh about a subject that is actually quite terrifying, but the laughter brings people together in a way that other types of protest can't. "

Performer Adam Wilson of sketch group Press Release Repeat said of the night. "It's truly awe-inspiring to join with those you admire for their skill and dedication, to speak to a common cause. The whole thing makes a body feel like a soldier in a justified battle, and there's not a lot of that going around. This is what comedy can be, when it's being all that it can be."

I asked Melissa what the next step was for the company was.

"We always envisioned the show being something recurring and the success of the night reaffirmed this. We're planning future Harper's Bazaars and looking for ways to expand on what we've already started with the first one. We're thinking each night will have a different stylistic concept-as this last one was a mock pro-conservative rally maybe the next one will be inspired by vaudeville or music hall. We're not sure. The important thing is to find a comedic style that is just. The form of the satire must complement (or in this case insult!) the content.

We also have plans to use the proceeds from the evening to fund some kind of public intervention or initiative. Right now we are considering a Museum Marathon. We will assemble a group of participants and use the proceeds from Harper's Bazaar for admission to the Royal Ontario Museum and the Art Gallery of Ontario. We will travel from the ROM to the AGO, staging a walking protest from one to the other. We will then walk down to Queen Street and do a gallery drop-in, ending at Ossington Avenue.

In this multi-level community project we are able to support the very institutions that are threatened by the budget cuts, create awareness by walking en masse to each venue, and build a community of people who will hopefully continue to support Canadian arts and culture. This will happen before the next Harper's Bazaar in 2007. The more energy and momentum we can build, the stronger we become. We are excited for the future of this project!