People seem to love harping on meteorologists and reporters for failing to predict weather conditions with 100 per cent accuracy. I've heard many argue, in fact, that they could draw up just as effective a forecast using nothing but their own imaginations.

Well, Toronto, you now have a chance to put some real weight behind that assertion in the form of your own hard-earned money.

As reported this week by the Canadian online sports betting community OLBG, digital bookies are now taking bets on when different cities in Ontario will recieve snow for the first time this season.

Weather betting isn't new, apparently, but this is the first snowy season that internet gambling has technically been legal and regulated in Ontario.

It was only a matter of time before these kind of bets popped up north of the border, where — let's be real — we're a lot more obsessed with when the first snowfall will hit than at least half of the U.S. 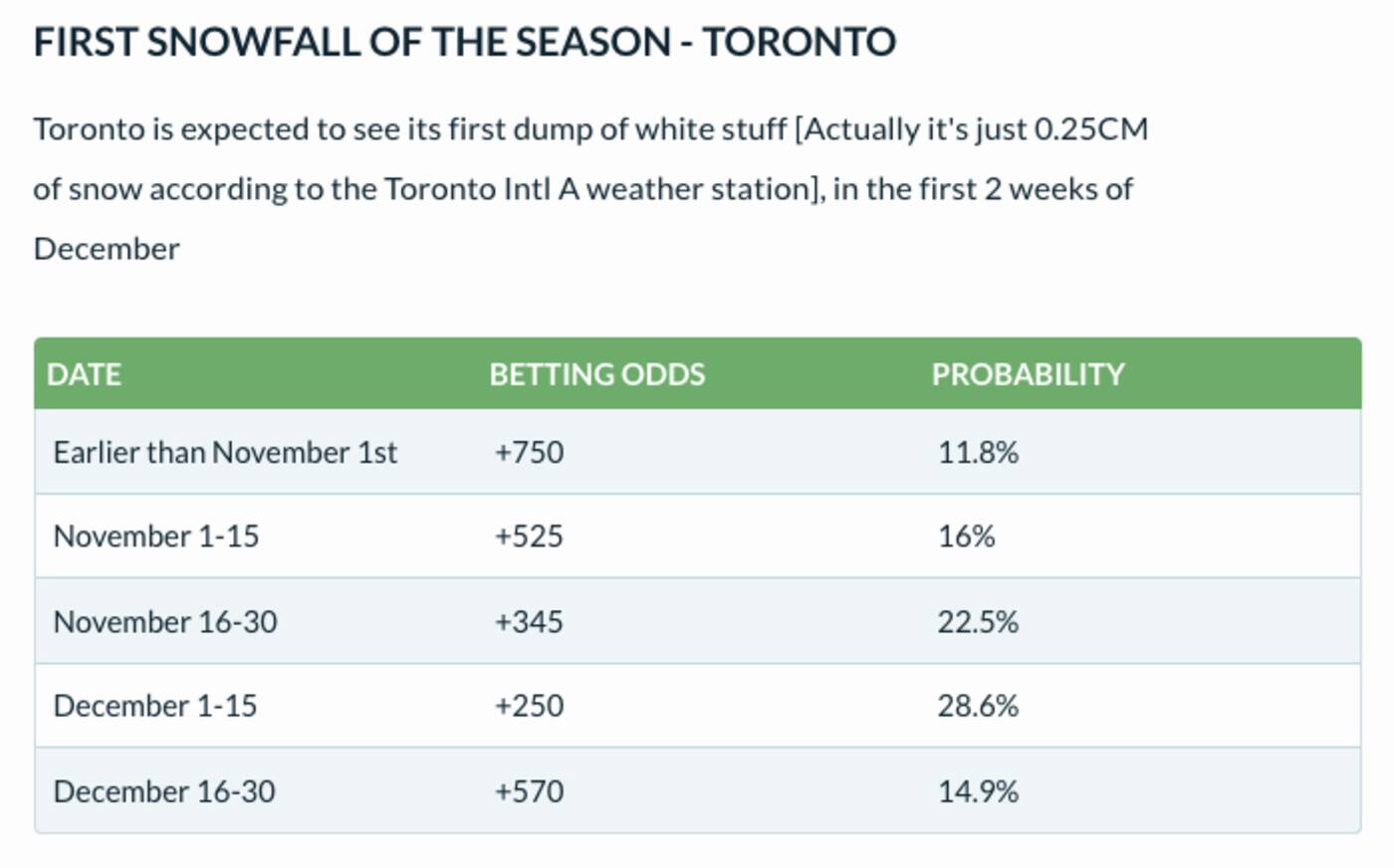 Sports betting Steve Madgwick has calculated the odds on when Toronto is most likely to receive its first snowfall of the 2022-2023 winter season. Image via olbg.com.

More and more major players in the world of online sports betting have been entering the Ontario market (or trying to) since April, when the province launched an AGCO-style regulator for the practice.

Bet365, FanDuel, DraftKings, Bet99, BetMGM, BetRivers; the list goes on. iGaming Ontario (iGO) announced in October that more than $6 billion worth of wagers were placed in Ontario using these and other digital betting platforms between July 1 and Sept. 30 of 2022 alone.

I know very little about odds and spreads and the technical aspects of high-level sports betting, but journalist Steve Madgwick does. He's been covering this stuff for 16 years and broke down some of the nitty gritty in a recent article about Ontario snowfall bets.

"There is nothing more inevitable than the weather and some betting sites have opened up betting odds on when the first snowfall of the season will fall in various cities in Ontario," he wrote on Oct. 17.

"Toronto is expected to see its first dump of white stuff (Actually it's just 0.25 cm of snow according to the Toronto Intl A weather station), in the first 2 weeks of December."

After a frustrating hour of trying to sign up for digital gaming websites on my work computer, which needs IT to permit the kind of geolocation that lets betting sites know I'm actually in Ontario, I managed to confirm at least one active snow bet on FanDuel.

You can't see much without logging in, but apparently it's there, and I don't trust myself enough to sign up for any more gaming websites right now, not even in the name of journalism.