The Claremont community in Pickering, Ontario is upset after the government decided to close a skating pond that had been used by locals for more than 40 years.

According to a recent CTV News article, residents of the small community located just north-east of Toronto were shocked a Transport Canada sign that read "No trespassing" was placed in front of their beloved rink.

Speaking with blogTO, Claremont resident James Gregory said the events all transpired this past Tuesday when someone driving past the pond witnessed workers from a property management firm called BGIS removing the hockey nets and taking apart a small changing hut the community had built 15 years ago. 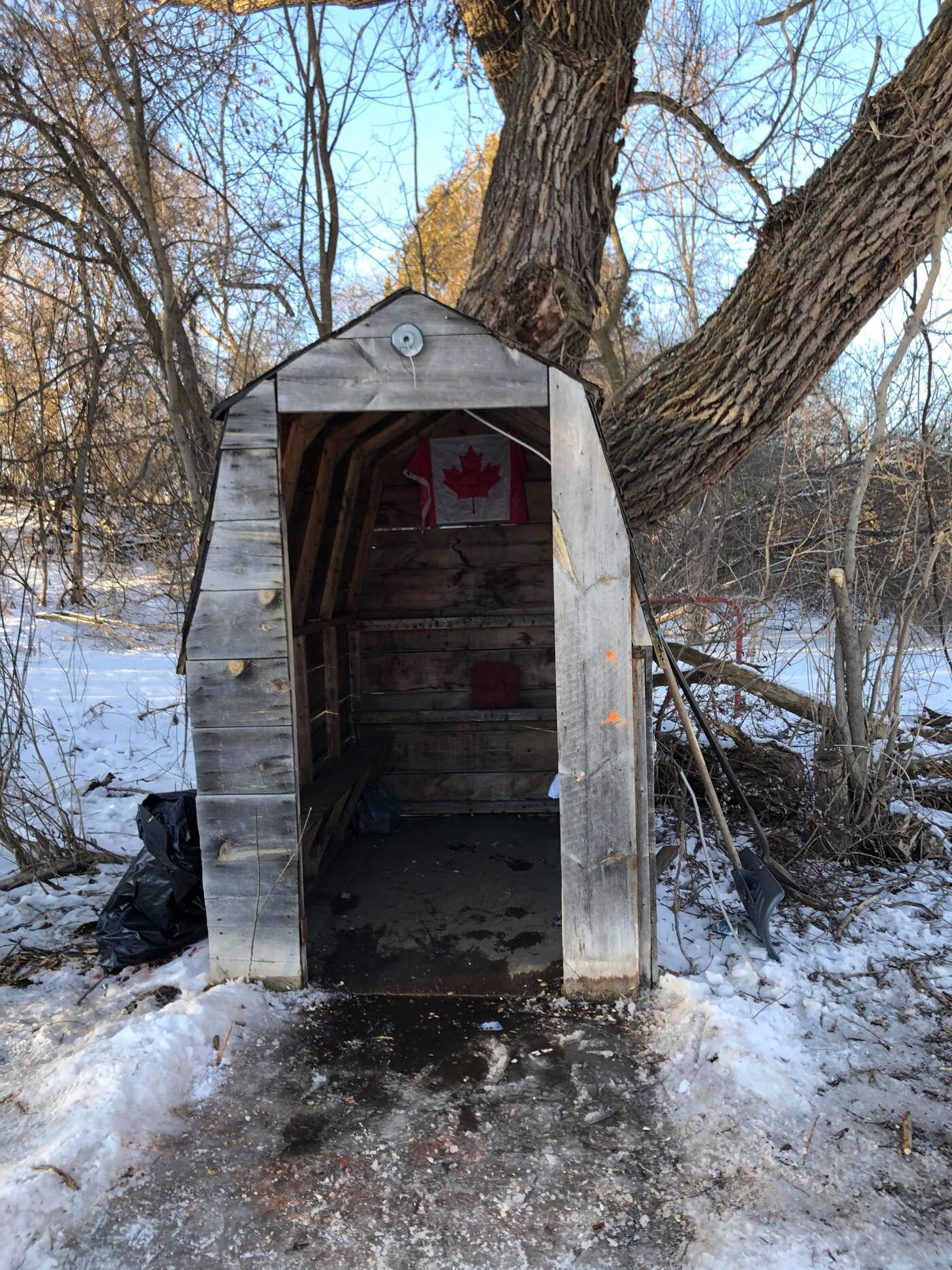 Changing hut built by the Claremont community 15 years ago.

"The workers had knocked down the shed and were dragging it away. They smashed the goals on the ice and apparently threw salt on the ice so people couldn't skate," he said.

"Everybody in town is pretty upset. It's a tradition in town and people have been skating for years. It's been a nice little place to go, for kids to play shinny, and I think people are particularly upset at the moment because it was one of the few outlets for people to go outside."

Many locals are also upset that they weren't consulted or even warned this was happening.

"Terrible way to handle things. Some tact would have been welcomed with discussions had with residents and Councillor Butt," resident John Cowan told blogTO.

"People living here are reasonable and would have welcomed [the] clarity. It is still up in the air as to the sequence of events and how it went from a 40 year tradition to a field of mess."

Others in the area are focusing on the damage salt can do to ecosystems.

"Kicking people off a natural skating pond, especially now of all times, is cruel. But the pouring of salt on a natural waterway is a crime in law and against nature. I am appalled," wrote Mary Delaney on Facebook.

"I feel bad for the kids, but putting salt on a pond is unbelievable. That boils my blood," added Julie Russell.

After doing some digging into the matter, Gregory learned that BGIS had been contracted by Transport Canada to close the pond down.

In a Facebook post, Gregory explained that the tenants, who lease the land from Transport Canada, have made complaints about trespassing and raised concerns about the legal liability of what would happen if someone was injured on their property.

"BGIS said that on Friday they were doing maintenance in the area and  found 20-30 people trespassing on these lands and called the police [...] BGIS was to remove the structures and put up trespassing signs," he wrote.

Residents have contacted their local MP and MPP in hopes of getting their rink back.

Pickering - Uxbridge MP Jennifer O'Connell said in a letter to Gregory she's already looking into it.

"I am horrified by what I'm seeing. This is outrageous and I have already reached out to the Minister of Transport's office to get to the bottom of why this happend and who authorized it," she wrote.

In the meantime, the community is exploring other options to get back on the ice.

"It's tricky. It's at a federal level so it's hard to figure out what the next steps are but one of the options is to lease back the land from the department of transportation," Gregory said.