You don't need social media to know that fitness culture has reached its zenith worldwide, though a quick browse through any number of fitspo hashtags on IG will be evidence enough to know that #gymlife is the #bestlife.

In Toronto, being part of the corporate work force generally leads people to consider gym memberships—to get fit, yes, but perhaps also to prove they have the whole adulting thing on lock.

And for years, gym options have been fairly limited, meaning only a handful of American brands, independent fitness centres and small local chains have been cashing out on a citywide dedication to staying in shape.

Of those big names, GoodLife Fitness has maintained its industry behemoth status for the last 10 years.

With 300 locations Canada-wide, the brand has been described by an ex-employee as the Walmart of the workout world, with the same relentless (and controversial) business practices to match.

But despite GoodLife's reputation of acquiring competitors before they can go big (think Nubody's, Seven Gold's, or Extreme Fitness), recent years have seen a new wave of on-the-pulse gym chains that make GoodLife's current layout seem a little passé. 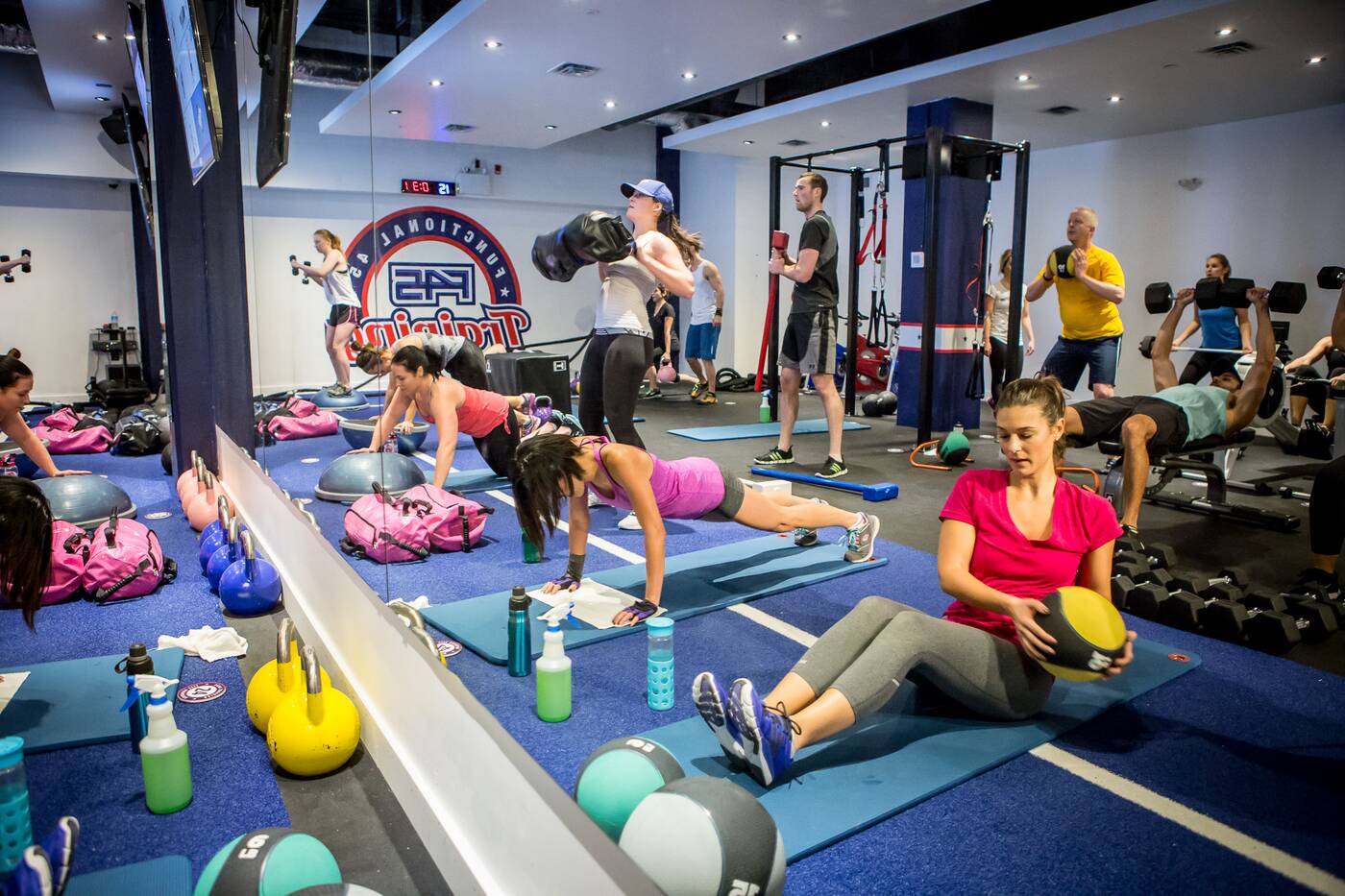 F45 Training has quickly expanded to 11 locations since opening their first Toronto gym in 2015. Photo by Jesse Milns.

The most notable of these is F45, a tech-heavy studio dedicated solely to 45-minute group classes whose programming has formed an almost cult-like following worldwide in the last four years.

Coming to Toronto by way of Australia, the fitness brand has exploded internationally—it has over 200 locations in 16 countries—and now has 11 gyms in the city with more locations in the works.

From the wearable heart rate monitors to the TV instructors, the custom playlists broadcasting live from Australia, F45 workout apps, and class names like 'Firestorm' and 'Hollywood', the F45 brand is designed to keep gym-goers engaged without thinking too hard about it.

"I got addicted to it really quickly and it was because of the trainers, the technology, and the music," says Jarrett Stanley, the owner F45's Liberty Village studio, which was the first in Canada.

"All the member really has to do is show up...You don't have to figure out what you have to do to progress."

At an average weekly membership price of $60 to $80 a week, the F45 model is by no means for those on a budget—here, people are paying premium for dynamic routines, eschewing rows of heavy equipment for group workouts they'd never do on their own.

On the exact flip side of the market is Hone Fitness: a chain by the same investors behind Extreme Fitness that has expanded to eight locations in the GTA since 2013.

Unlike F45, Hone is for people who know their way around the squat racks and don't want to pay extra for the frills. 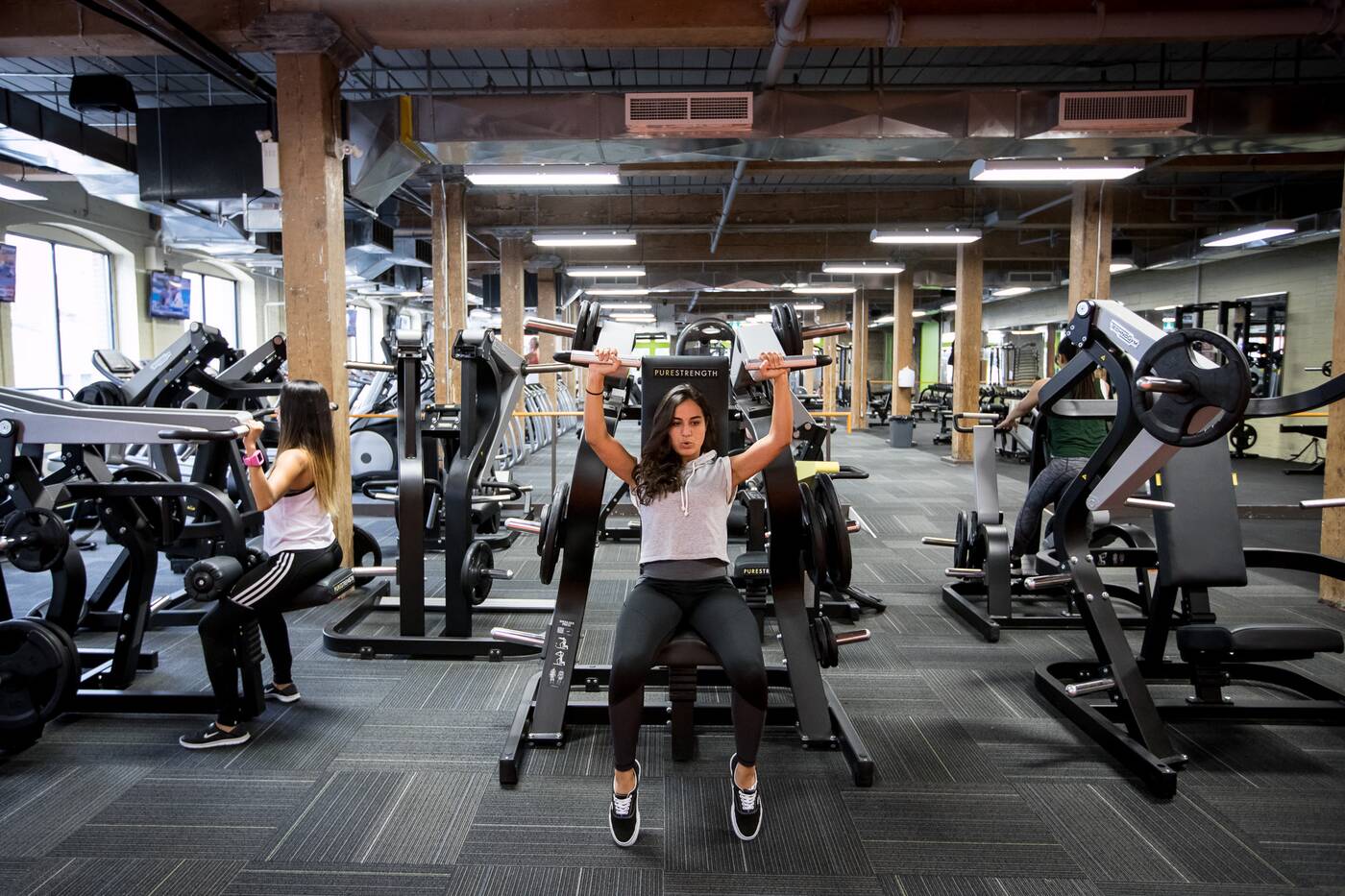 Hone Fitness on Carlaw does away with towel service and saunas in exchange for more weight machines and free weights. Photo by Jesse Milns.

"We think that consumers are now smarter on how they move around at the gym," says Manuel Campos, Hone's assistant general manager.

For $20 a month, members have access to all eight studios around the city, which each come equipped with squat racks, free weights, astroturf, and bumper plates. There's no towels or saunas here; nor are there annual contracts or fees.

"More people are going into the weight area, they’re reducing their cardio," says Campos. "There's a whole movement with this new generation where crossfit and weightlifting and power lifting are getting more popular."

With four more locations currently under construction Hone is foucsing in on the discounted, strength-focused model that workout junkies seem to favour these days, rivaled only in price by the discount gym Fit4Less, which is a GoodLife subsidiary budget brand.

Ultimately, gyms are no longer just holding rooms for machinery, change rooms, and a couple of studios to hold zumba and weekly pilates.

GoodLife might still be the most shredded guy in the gym right now, but as the tech surrounding fitness advances and competition rises, studios are starting to offer better options for a generation of fitness fiends who know what they want, and know exactly how much they'll pay to get it.